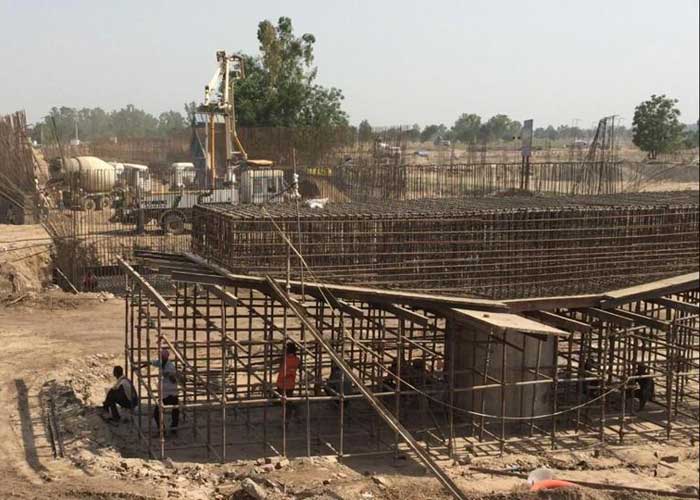 A bridge that would play a major role in connecting India and Pakistan’s sides of the Kartarpur Sahib Corridor is yet to be constructed as the neighbouring country has been showing reluctance over the issue.

The bridge would link Dera Baba Nanak in Punjab’s Gurdaspur and Kartarpur Sahib, situated 4.5 km from the border in Narowal district of Pakistan’s Punjab province, and the pilgrims would use it while their visit to the shrine.

India’s work is almost on completion mode and the officials linked to the corridor indicated that the portion of the bridge being constructed from this side would be completed before October 31, but there is no word from Pakistan over their schedule.

Pakistan has not even shared its intention whether it would complete the remaining part of the bridge from its side, said an official in know of developments on the project.

Some officials in the internal security wing of the Indian government told IANS on condition of anonymity that Pakistan’s “dilly-dallying” attitude led them to construct an alternative path linking the two sides so that Kartarpur Corridor is ready on time.

Devotees from India wishing to visit Kartarpur Sahib gurdwara where Sikhism’s founder Guru Nanak Dev spent the last 18 years of his life and is his final resting place, would use the alternative route which is constructed just a few metres away from the bridge and situated around 300 metres away from the International Border between India and Pakistan.

As per current scenario, the pilgrims would take the alternative road to visit Kartarpur Sahib after parking their vehicle at the Passenger Terminal Building (PTB) being constructed here for their facility.

“The bridge will be constructed from our side before October 31. As the bridge from Pakistan side is not complete we have adopted an alternative path which is constructed around 300 metres away from the border and near to the bridge constructed our side. Pilgrims would go from that path and also return back using it,” said Land Ports Authority of India (LPAI) Chairman Govind Mohan.

“After completion of the bridge from Pakistan side, pilgrims will go and return from the bridge.”

Asked how pilgrims would visit during flood situations, the officer said: “It is a dry canal on which the bridge is being constructed. The water level of the canal rises to one-and-a-half feet during rains. So, the alternative road we have constructed is made on much higher foundation. There would be no harm to the road because of flood.”

But, Mohan, who is also Additional Secretary in Ministry of Home Affairs, clarified that there is not such indication of flood in the area.

“As per the bridge finally constructed, there would be no danger from floods because the bridge is placed much higher. This path has been constructed keeping in mind the problem.”

The bridge, as well as the 4.2 km-long corridor on the Indian side, will be completed by October 31, a week before the celebrations to mark the 550th birth anniversary of Guru Nanak Dev, he said.

Mentioning that the government has acquired 50 acres, Mohan said the PTB has been constructed on 20 acres and the remaining 30 acres will be used in the second phase.

Explaining about the second phase of construction, the official said there is proposal for lodging facility, a museum and watch tower among others.

The online registration system is expected to come on October 20 after the Memorandum of Understanding between the two sides is agreed and signed, said the official, adding the applications can be lodged electronically through this portal.

“The processing will be done in such a manner as to ensure with sufficient time to spare before the expected or the desired date of departure, permission would be conveyed or denied… whatever would be the decision.”

The official indicated about some other works to be done through the project, including a proposal for the betterment of the binocular facility through which pilgrims can take a view of the Kartarpur Sahib shrine without going there.

“There are several proposals regarding the binocular project. Plan has been prepared for the construction of a big place here for that purpose. Work will be started soon after we get approval.”

As the mobile connectivity was almost dead in the area, the government is mulling to give relaxation so that pilgrims would not face any difficulty in keeping contact with their kin untill they cross the border to visit Kartarpur Sahib shrine.

Asked over the mobile connection problem, the official said: “These are border areas and the stated policy of the government for such areas is that the connectivity and the speed of network are bit hampered.

“But, we are asking for the special relaxation for our area where normal connectivity can be allowed so that the huge number of people coming here do not face connectivity problem.”

“You are facing the problem as you are sitting next door to the border, but we are asking for a carbout — a system to boost mobile connection– which seems that the government will agree to,” he said.  (Agency)