One Nation One Ration Card` scheme across the country soon: Danve 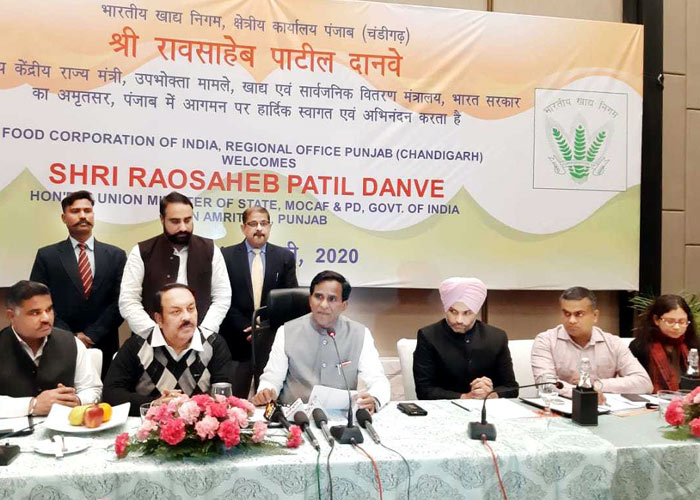 With an aim to further improving the Public Distribution System at panIndia basis, the Central Government is going to implement `One Nation One Ration Card` scheme in the country soon.

Revealing this Union Minister of state for Consumer Affairs, Food and Public Distribution Mr. Raosaheb Dadarao Danve said that with the implementation of One Nation One Ration Card` scheme any beneficiary would be allowed to get food security benefits from any PDS Depot across the country as per the guidelines.

While interacting with media persons, Mr Danve, who was here to attend a meeting with officials from Food Supply and Consumer affairs department, PUNSUP and Warehouse related with wheat procurement, informed that for effective implementation of this new scheme 12 clusters have already been established in the country and the scheme in be implemented in the coming days.

“ This scheme will provide a sturdy apparatus to PDS system in the country as under this new scheme the consumers need not to apply new ration card in view of migration to other areas of the country. As the same card will be applicable all over the country the consumer beneficiaries would be able to buy subsidized food items from any ration depot in the country as per stipulated norms, added Mr. Danve.

He further revealed that out of total 332 LMT procured wheat at national level, Punjab contributes about 129 LMT. Similarly Punjab contributes about 113 LMT in the aggregated procurement of rice that touches 416 LMT mark in the country. Mr. Danve further said as the wheat procurement would start in the coming weeks the main purpose of his visit was to discuss the arrangements to run the wheat purchase smoothly

Mr. Danve also informed that to store the wheat on scientific techniques silos were being set up with capacity of 100LMT and the union government has also fixed a target to set up the silos with 700LMT storage capacity in thecountry.

He further revealed that to store 33.5 LMT wheat 92 sites have been selected in Punjab and preparation work was already in progress.“ Till 31 January there was 96 LMT wheat was in store and the same was being shifted to Maharashtra so that the sufficient space would be available for the wheat to be procured in the coming season, added Danve.