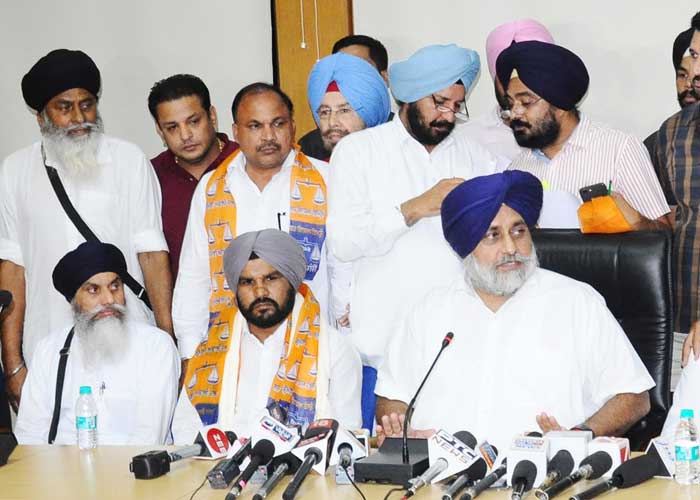 Welcoming the BJP leader into the party, the SAD President said Mr Desujodha had expressed solidarity with the party and its ideals and had pledged to work for peace and communal harmony besides resolving grievances of the people of the constituency.

Expressing confidence that the SAD would win the Kalanwali seat, the SAD President said the people of the constituency had expressed confidence in the SAD in the 2009 and 2014 assembly elections and would continue to support the party. He said Desumajra would file his nomination papers on October 3.

Speaking on the occasion, Mr Desujodha said the BJP had betrayed the SAD by co-opting its legislator Balkaur Singh into the saffron party. “The BJP also betrayed me after promising to re-nominate me as the party’s candidate from the seat. I will now give an appropriate response to the BJP for these twin betrayals and ensure a win by 25,000 votes for the SAD”, he added.

Meanwhile while answering a question, the SAD President said the SAD Haryana unit led by its Incharge S Balwinder Singh Bhundur was in talks with other political parties for an alliance in Haryana. “We are confident of arriving at an understanding in a day or two”, he added.

Mr Badal condemned the manner in which drug traffickers were shooting and killing cops trying to trap them. He said one cop died at hands of drug traffickers when he approached them as a “buyer” in Jandiala Guru even as the traffickers escaped on a motor cycle. “This is true reflection of drug menace under the chief ministership of Capt Amarinder Singh in which delivery of drugs has become a norm”, he added.