Home National Now Mumbai gets it own ‘Shaheen Bagh’ 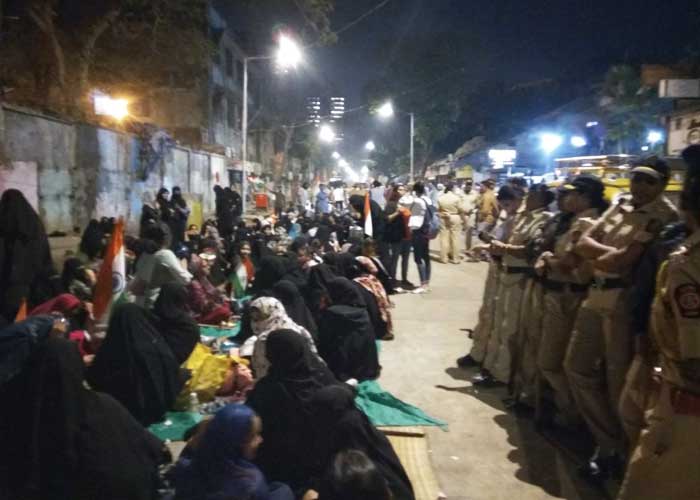 Inspired by the Shaheen Bagh protests in New Delhi, a large group of women have launched a similar style of protests from January 26-27 midnight in south Mumbai early on Monday.

Terming it a ‘Mumbai Bagh’, they are silently protesting against the CAA-NRC-NPR and by morning the crowds swelled even as Mumbai Police rushed to make tight security arrangements at the site at Morland Road-Thandi Sadak.

The protesters are mainly Muslim women from minority-dominated areas of Madanpur, Byculla, Agripada, Jhoola Maidan and surroundings who are staging a sit-in agitation, off the Arabia Hotel, near Mumbai Central station.

Senior Police Inspector Shalini Sharma told mediapersons that the protesters were asked to take prior permission but they refused to move from the site and continued to occupy the road.

Initially, surrounding the protesters around 3 a.m., by dawn the police stepped aside and the peaceful protests continued with raising of slogans against the Bharatiya Janata Party-led NDA government, placards and posters opposing CAA-NRC-NPR, reading of the Preamble of the Constitution, singing patriotic songs and poems, and waving of the tricolour.

The protesters also sent messages to people providing regular updates and asking them to join them from their Twitter handle ‘Mumbai Against CAB’.

Besides, activists in Kalyan town in adjoining Thane district have announced a five-day Shaheen Bagh-type agitation at the Babasaheb Ambedkar Garden starting February 1.

Some of the messages today read: “URGENT. More people are needed at #MumbaiBagh right now. #IndiaAgainstCAA_NPR_NRC is for everyone and we all share equal responsibility towards sustaining this fight. The unjust & discriminatory forces unleashed by this govt must be defeated! Please join and spread the word.”

Similarly, Twitter handle ‘CAA/NRC Protest Info’, posted: “Need people to come to #MumbaiBagh or we will be detained … Please do come ASAP. Location: Mumbai Central, Next to Arabia Hotel, Opposite City Centre.”  (Agency)