Home National Not refugees, only infiltrators to be driven out: Amit Shah 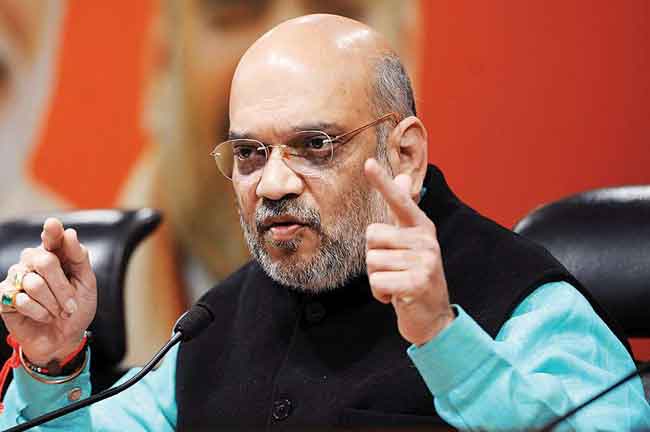 Accusing West Bengal Chief Minister Mamata Banerjee of ‘misleading’ the people on NRC, Union Home Minister and BJP president Amit Shah on Tuesday asserted that all Hindu refugees, as also Sikhs, Christians, Jains and Buddhists will be given permanent citizenship by passing the Citizenship Amendment Bill (CAB) before undertaking any National Register of Citizens exercise.

Shah, addressing a convention on the NRC at the Netaji Indoor Stadium here, simultaneously made it clear that all infiltrators will be found out and forced to leave the country.

Coming down heavily on Banerjee, Shah said she was now siding with infiltrators as they were her “vote bank, whereas in the past she wanted them to be thrown out as they voted for the Communists.

“In Bengal, people are being misled on NRC. I would like to present the truth from this platform. Mamatadi says in case there is an NRC exercise lakhs of Hindu refugees will have to leave Bengal. There cannot be any bigger lie.

“I want to assure people of Bengal publicly that all refugees – Hindus, Sikhs, Buddhists, Jains, Christians, especially I would like to tell the Hindus, as they are a big majority, that not a single one of them will be forced by the government of India to leave the country,” said Shah.

The BJP president said the ‘lie was being spread’ to ‘incite’ the people of Bengal, and made an appeal that none should “make fun on such a sensitive issue”.

“Don’t make fun of those who have returned here after being duped, or after enduring torture or atrocities. Their sighs will sink you,” he said.

Shah said the Narendra Modi government will first introduce and pass the CAB in parliament bestowing citizenship on all refugees. “After that you will have the same rights on the soil of India like me.”

Taking a dig at the Trinamool, Shah said, “Now they are ‘shedding crocodile tears’, but when the NDA government brought the CAB in Rajya Sabha they stalled the House and did not allow the legislation to pass. Trinamool is solely responsible for refugees not getting citizenship till now.”

“But now the situation is completely different. Regardless of the extent of opposition from the Trinamool, CAB will be passed and all refugees will become proud Indian citizens.”  (Agency)