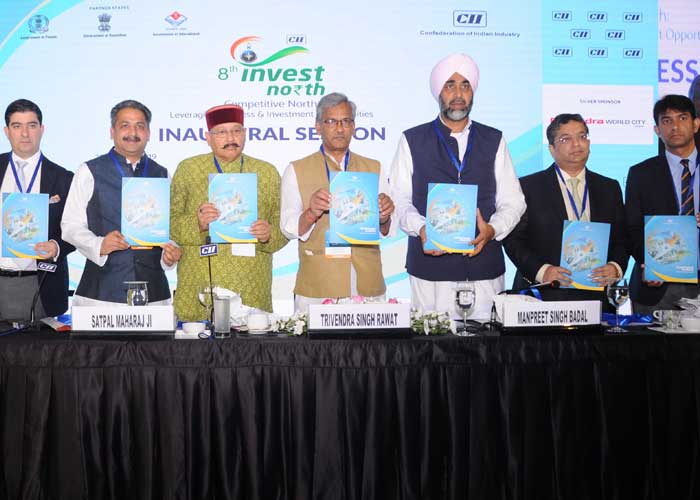 Mr Trivendra Singh Rawat, Chief Minister of Uttarakhand said that the Government of Uttarakhand is working towards developing the state into a unique economy of manufacturing and services sector.

To encourage capital investment in various sectors, the state government has set up a single window system for the desired approvals/ permits / clearances from various departments for setting up businesses. In addition, a dedicated ‘Investment Promotion and Facilitation Center’ (IPFC) has been established at the Directorate of Industries level for investment promotion in the state.

He added that by amending the Zamindari Abolition and Land Reforms Act 2001, the District Magistrate has been delegated the right to grant land for the establishment of micro, small and medium enterprises in the identified areas under the MSME policy. For the establishment of agriculture & horticulture and food processing industries, a provision has been made to give agricultural land on 30-year lease.

Mr Manpreet Singh Badal, Finance Minister of Punjab said that, Punjab is open for investments particularly in sectors including food and food processing, pharma, textile, agricultural machinery and IT & ITES. Citing the benefits, the state has to offer, Mr Badal said that Punjab has the highest rail density in India at 45km per 1000 square kilometers. The state has two international airports and world class road connectivity.

With only 1.5% of land area Punjab contributes 3% to India’s GDP, Punjab is home to an estimated 2 lakh registered MSMEs giving it a strong industrial base. Punjab offers a blend of skilled manpower, robust infrastructure, industry driven ese of doing business initiative and friendly policies making it an ideal ecosystem for investment, he added.

Mr Satpal Maharaj ji, Minister of Tourism, Government of Uttarakhand said that since formation of Uttarakhand in 2000 the State Government has taken several major initiatives to upgrade the infrastructure & G2B Services delivery in the state to boost economic growth.

Within a short span of its existence, Uttarakhand has emerged as a significant destination for investments in manufacturing industry, tourism and infrastructure. Tourism is a major focus for Uttarakhand due to its geographic profile.

The state government will develop the 5000-year-old trail traveled by the Pandeva’s. Spiritual and mystic towns in the state will be developed for tourism and a total animal kingdom will be developed to boost tourism. The state has taken a major initiative to ease the acquisition of land slashing tax from 150% to 10%.

According to Mr Vijay Inder Singla, Minister for School & Public Works, Government of Punjab, Punjab is looking to build confidence among investors and shift the focus from an agriculture-based state to an industrial state.

The cost of power in Punjab is fixed at USD 0.07 per unit for 5 years for all industries, which is much lower than the average power tariff in India. Land can be rented on a long-term lease basis for 99 years or bought on a freehold basis. Once the cargo centers at Amritsar and Mohali are operational the state will have one of the best ecosystem in the country for industry to thrive.

Rajasthan provides ample opportuntities and scope of doing business, said Dr Subodh Agarwal, Addl Chief Secretary- Industries, Government of Rajasthan. MSMEs can initiate business along with exemption from inspection for first three years. He invited investors and business community to come and invest in the state of Rajasthan.

8th edition of Invest North organised by CII for the first time in Southern India, in Bengaluru concluded successfully with around 90 plus one-to-one meetings of investor and business community with Government of Punjab, Rajasthan and Uttarakhand.