Home National ‘No cash, no Paytm’ posters at Shaheen Bagh 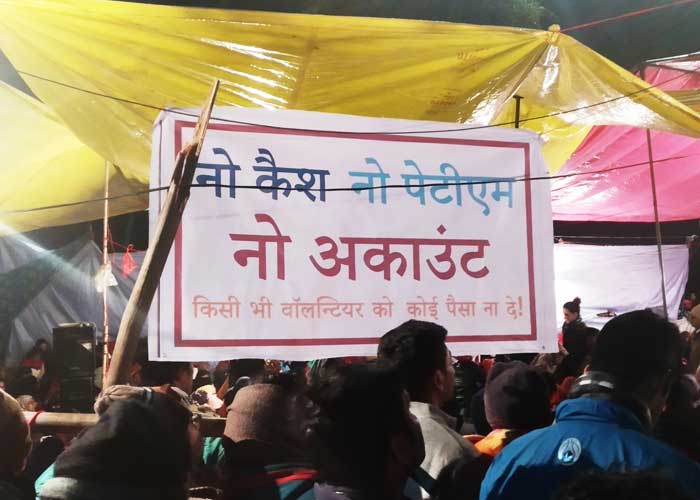 In order to refute the allegations of being paid, the protesters at Shaheen Bagh have placed posters which read ‘No cash, no Paytm’.

The posters were displayed at the protest site as it was alleged that women coming to protest were being paid Rs 500 per day. A video regarding this also went viral on social media.

Mumtaz, a protester, said: “Taking money via bank account transfer, online transfer or cash is strictly prohibited over here. The posters also say the same. Apart from this, we are repeatedly cautioning the protesters not to take money.”

The posters are a reply to those who are spreading rumours about the women protesting for a cause here, said Arfa, another protester who is taking care of the arrangements.

A 63-year-old protester Asharfi, who reached here on Saturday, said: “We are not here to take Rs 500 rather we are here to protect our 500 years which our ancestors have dedicated for India.”

Asharfi fears that if they don’t raise their voice now, their children might land up in some danger in the future.

The protesters were angry over the viral video which claimed that the women, who were protesting against the Citizenship Amendment Act (CAA), were paid Rs 500 per day.

Imran, one of the protesters, even said that this should not be talked about as all this is being done to tarnish the image of the peaceful protest going on here.

The Delhi Police once again appealed to the protesters to clear the main road of Shaheen Bagh as traffic is getting affected due to the blockade and people going to offices and children going to schools have to face difficulty.

The police also held a meeting with members of the Aman Committee to get the blockade removed.  (Agency)