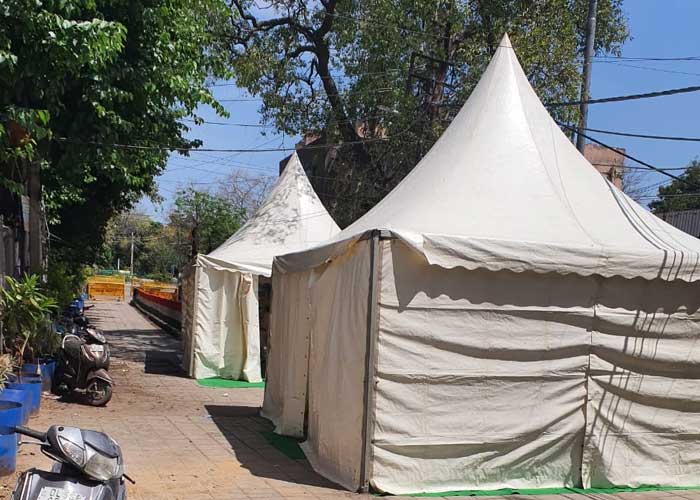 Tablighi Jamaat’s international headquarters Nizamuddin Markaz in southwest Delhi, where around 1,400 persons were stuck in the wake of a nationwide lockdown due to the coronavirus pandemic, has been evacuated even as at least 11 corona positive cases from among those evacuated have been confirmed.

These patients include 10 Malaysians. Reports of 34 samples are yet to arrive.

On Monday night, around 100 suspected coronavirus cases were evacuated from the

religious complex in buses. They have been kept in isolation in Narela area of Delhi.

Those who were ill were admitted in various hospitals.

Six of the persons who returned to Telangana from the Tablighi HQ have since died from the coronavirus infection. Positive cases were reported from J&K, Tamil Nadu, Andhra Pradesh, and Andaman and Nicobar Islands etc.

The family of a person who died on Monday after attending the religious congregation has been kept in isolation even as those who returned to their homes in Andhra Pradesh and Telengana were being tracked. At least 18 persons related to the deceased have been quarantined in Hyderabad.

A total of 194 people remain quarantined in Telengana while 981 persons in Tamil Nadu have been identified for screening.

As per information available, there were around 250 foreign nationals stuck at the Tablighi HQ, including around 200 from Indonesia, 30 from Thailand, 10-15 from Kyrgyzstan, and Malaysia.

The religious group’s international headquarters, called Nizamuddin Markaz, is situated in the middle of Nizamuddin colony in southwest Delhi, from where it originally started. It has centres in over 200 countries.

On Saturday and Sunday, around 200 persons from the complex were admitted in various hospitals in Delhi as a precautionary measure. Out of these 200, six of those admitted in Lok Nayak Jaiprakash hospital had returned a coronavirus positive report.

Asked about the coronavirus positive cases, group spokesperson Dr Mohammed Shoib Ali had then claimed that the hospital concerned had not given them any such report.

Tablighi group maintained that the congregation of so many persons in the complex was reported before the nationwide lockdown on March 24 midnight. They had merely followed instructions to people to stay put wherever they were.  (Agency)