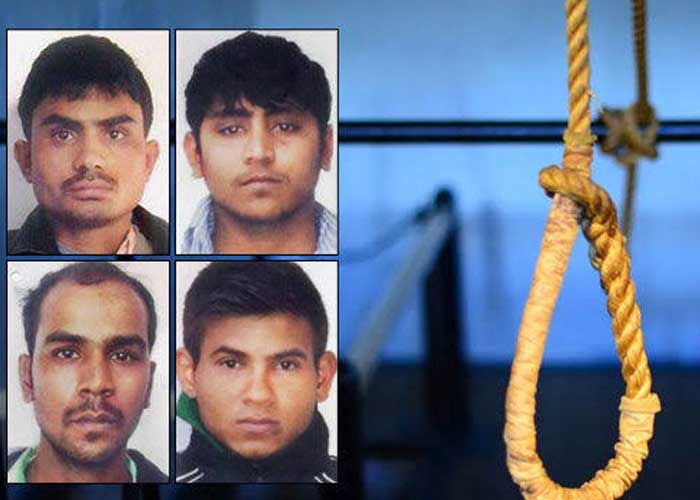 The Patiala House court on Saturady while disposing of the plea filed by Nirbhaya convict’s counsel seeking relevant documents to exercise the remaining legal remedies noted that “jail authorities have already complied with the request”.

Session Judge Ajay Kumar Jain stated that the jail authorities have already complied with the request made by the convicts. They have supplied the documents “whatever lying with them and today also brought, paintings, diary entry “Darinda”.

“In view thereof, no further directions for supply of any documents required. However, the jail authorities are directed to hand over copy of paintings and note book titled ‘Darinda’ to the counsel for convicts today in court itself against acknowledgement. Application disposed of accordingly,” the court said.

During the course of hearing, Public Prosecutor said these were mere delaying tactics adopted by the convicts.

Advocate A.P. Singh, lawyer for three of the four death row convicts in the Nirbhaya gang-rape case had moved an application before the court seeking directions to the Tihar Jail authorities to supply him the relevant documents in order to exercise the remaining legal remedies available with the death row convicts — Vinay Pawan and Akshay.

The Public Prosecutor also told the court that he spoke to the jail authorities over the phone and a report in this regard will be filed shortly as the jail officials were on their way to the court.

The judge demanded from the convicts lawyer to show what he has filed.

Singh, said that he received some documents, but has still not been supplied with the personal diary of one of the convict — Vinay Kumar Sharma and also the medical documents.

Judge then asked the lawyer to wait for until the report arrives form the Tihar Jail.

On this, the convicts lawyer said he was not questioning the intention of the jail. “I know the jail has been changed. It isn’t there fault, too,” he said.A

The Public Prosecutor refuted the allegation saying that the defence counsel was trying to defeat the speed of law.

Singh, in his plea filed before the Patiala House Court sought urgent orders of the court in order to file a mercy petition of Vinay Sharma and in relation to requests for documents for convicts Vinay Sharma, Pawan Kumar Gupta and Akshay Kumar Singh.

He further said that the convicts undertook several steps to obtain relevant information necessary for filing the mercy petitions. In regular interval, the convicts requested the concerned authority to supply documents pertaining to their medical records from 2012 to 2015 and 2019-2020, records of cellular confinement, records of the amount earned in prison through labour, records of educational and reformative activities like Tihar Olympics and Painting, etc.

The Supreme court had recently dismissed the curative petition for the other two convicts — Vinay Kumar Sharma, 26 and Mukesh Singh, 32.

The court had recently issued death warrant against the convicts and fixed 6 a.m. on February 1 as the date and time of execution of the death penalty.

The 23-year-old victim in the case was brutally gang raped and tortured on December 16, 2012, which later led to her death. All the six accused were arrested and charged with sexual assault and murder. One of the accused was a minor and appeared before a juvenile justice court, while another accused committed suicide in Tihar Jail.

Four of the convicts were sentenced to death by a trial court in September 2013, and the verdict was confirmed by the Delhi High Court in March 2014 and subsequently upheld by the Supreme Court in May 2017, which also dismissed their review petitions.

A Juvenile involved in the crime was convicted by a juvenile justice board and released from a reformation home after serving a three-year term.

Hearing in a different case, Chief Justice of India S.A. Bobde on Thursday said a condemned person cannot fight the death penalty endlessly and it was important for the capital punishment to reach its finality.A

The death penalty, he noted, cannot be questioned at every turn by the convict.  (Agency)