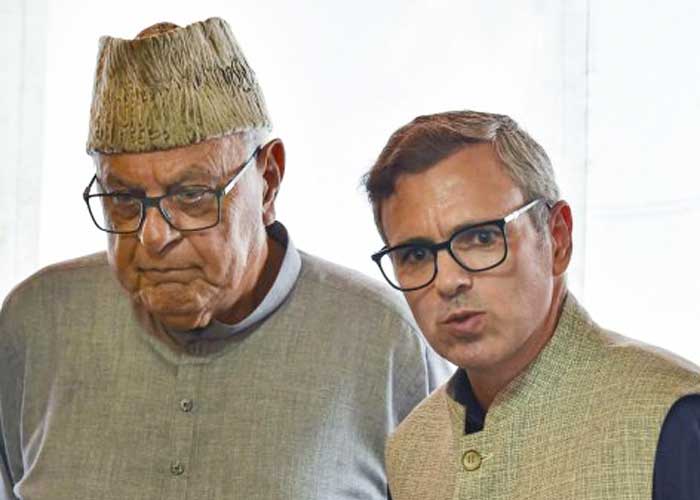 Farooq Abdullah, flanked by his wife Molly, came out of the Gupkar Road house to greet the delegation.

The senior leader, who is under house arrest under the draconian Public Safety Act (PSA), waved to the reporters outside his residence, flashing victory signs.

“The delegation enquired about Farooq Abdullah’s health and discussed the situation after the revocation of Article 370 with him and Omar Abdullah,” sources said.

The delegation had earlier met Omar Abdullah, who is detained at the Hari Niwas here. It was the first such meeting between Omar Abdullah and party leaders ever since he has been put under detention since August 5 when the Central government abrogated Article 370.

Later, Rana told reporters that for any political process to begin, the political leadership of the state must be released.

“There is anger about the lockdown,” he said.

Rana said that his party appeals that for the revival of democracy in Jammu and Kashmir, “all leaders from mainstream and others groups without any criminal record should be released to initiate the political process and win the hearts and the minds of the people”.

About his participation in the Block Development elections, Rana said: “See, there is a complete lockdown… Let them (the leaders) be released, then the working committee of the party will meet and discuss and formulate a strategy for the future.”

Party MPs Hasnain Masoodi and Akbar Lone were also part of the delegation.

“Both father and son are in good spirits,” Justice (retd) Masoodi told IANS. “We discussed their detention and the future course of action that the party is going to take.”

The permission for Sunday’s meeting was granted by the Jammu and Kashmir administration, days after it was sought from Governor Satya Pal Malik.

The delegation had officially maintained before the meeting that the point of discussion would be restricted to the prevailing situation in Kashmir, following the abrogation of the Constitution’s Article 370, which gave special rights to Kashmir, on August 5, but it was widely speculated that the upcoming BDC polls could come up during the meeting.

After the Abdullahs, sources said a PDP delegation will be allowed on Monday to meet Mehbooba Mufti who has been lodged at Chashma Shahi after detention.  (Agency)