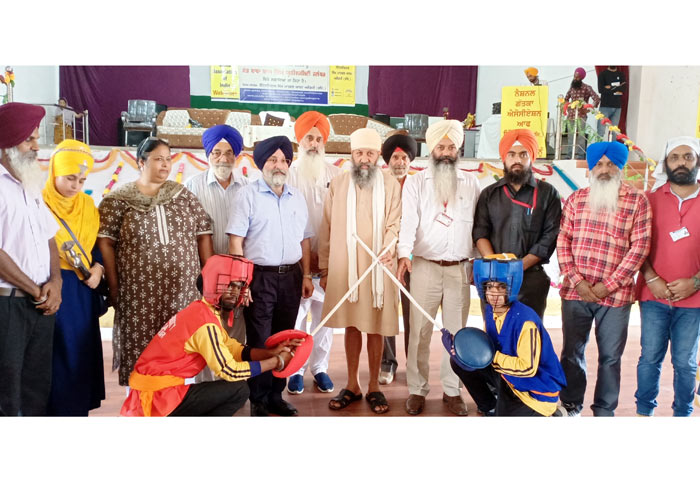 On this occasion, University Sports Director Dr. Pritam Singh and Coach Narender Kaur were also present as observer of the Sports Authority of India.

Speaking on the occasion, Sant Baba Dilawar Singh exhorted to all religious institutions and governments to promote this martial art as this traditional game was inherited by our revered Gurus.

He congratulated the players for the establishment of Gatka Academy at the University and assured that the university would promote this game further in all the neighbouring villages so as to keep away the children from drugs and encourage them to follow the principles of Gurbani.

Describing achievements obtained by university in a short span of time in the field of academics and sports as a milestone, Vice-Chancellor Dr. Ball added that university would pay more attention to the field of sports so that students could excel in education as well as sports.

Speaking on the occasion, National Gatka Association of India (NGAI) President Harjeet Singh Grewal State Awardee informed that three Gatka academies have been opened by NGAI and two coaches have been recruited in each academy. In addition, 50 Gatka players who have won the National Gatka Championship would be given a scholarship of Rs 10,000 per month.

He said that efforts are being made to make Gatka internationally popular and as a result of these efforts, digital score board has already been introduced to bring more transparency in this game. Besides this, four synthetic grounds have also been purchased for three academies. Gatka promoter Grewal said that fiber sticks would soon be replaced in this game with wooden sticks.

He added that more than 100 Gatka coaches across Punjab and Haryana would be imparted training during five-day Gatka coaching camp which have been organized in association with the International Sikh Martial Arts Academy (ISMAA). On this occasion, the Sports Director Dr. Pritam Singh briefed about the achievements of university in Gatka.