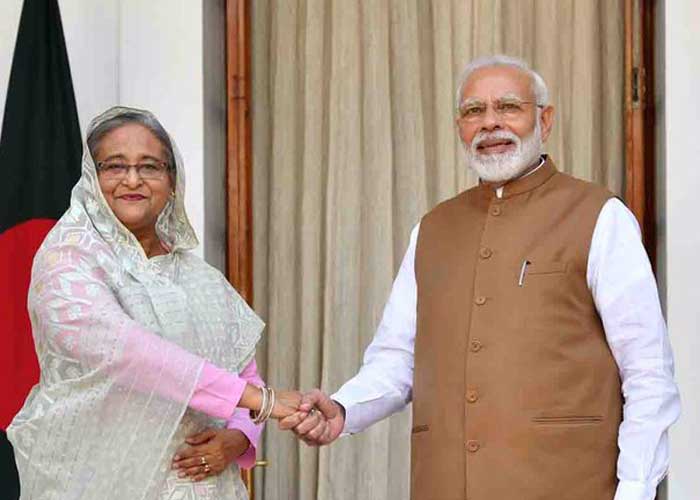 The meeting between the two leaders is the second in 10 days. The two leaders had met on the sidelines of the UN General Assembly in New York on September 27.

“A relationship setting the template for bilateral cooperation PM @narendramodi warmly welcomed Bangladesh PM #SheikhHasina on her visit to India. The leaders have met for the second time in 10 days exemplifying the strength of India-Bangladesh ties,” tweeted MEA spokesperson Raveesh Kumar.

“Taking our ties to the next higher level. EAM @DrSJaishankar had a warm conversation with Bangladesh PM #SheikhHasina. Reaffirmed India’s highest priority to her relations with Bangladesh,” he posted.

The two sides are expected to sign six to seven MoUs in areas of connectivity, capacity-building and culture after the talks at Hyderabad House.

The talks are to revolve around trade and connectivity, development cooperation and people to people connect, culture and other issues of mutual interest.

One of the MoUs is to be for the supply of liquefied petroleum gas (LPG) from Bangladesh to India’s northeast.

Omera Petroleum and Beximco LPG will export LPG to state-owned Indian Oil Corporation (IOC), which will bottle and sell to consumers.

Another MoU is likely to be inked for a new waterway to connect the Meghna river in Bangladesh with the Gomati river in Tripura.

The water-sharing of common rivers, Rohingya repatriation, and investment issues are also likely to be discussed during the bilateral meeting.

Assam’s National Register Of Citizens is also likely to figure in the talks. Prime Minister Modi had assured Hasina during their September 27 meeting in New York that Bangladesh need not be worried over the NRC, according to Bangladesh media reports.  (Agency)