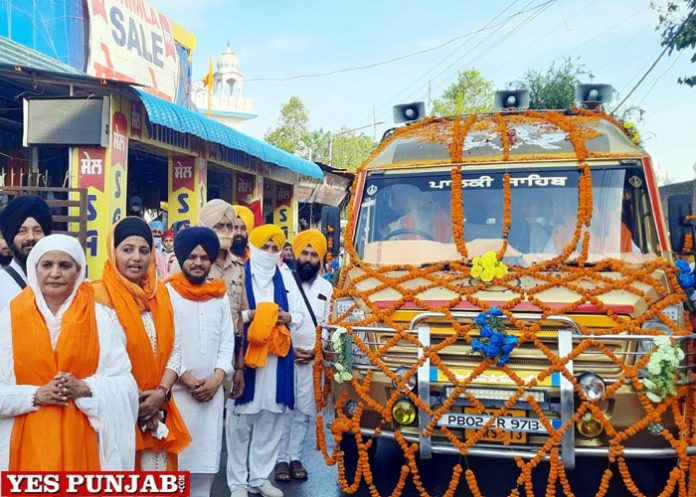 On this occasion, Giani Raghbir Singh shared his views with the sangat and congratulated on the 400th Prakash Gurpurab of the ninth Guru and said that this Nagar Kirtan was started on March 20 from Gurdwara Guru Ka Mahal Sri Amritsar Sahib, which had reached martyrdom site of Sri Guru Tegh Bahadur Sahib at Gurdwara Sis Ganj Sahib at Chandni Chowk, Delhi, passing through various gurdwaras and places related to the visit of the ninth Guru. He said that Nagar Kirtan has been completed after it arrived from Delhi via Haryana and reached the land of Sri Anandpur Sahib.

Meanwhile, SGPC president Bibi Jagir Kaur said that decorating and carrying out Nagar Kirtan is a part of Sikh tradition and the purpose of the same during centenary celebrations is to inspire the sangat about the historical day as well as to flourish the Gurmat (teachings of the Sikh Gurus).

She said that it is our good fortune that the 400th birth anniversary of Guru Tegh Bahadur Ji came in our lives.

Bibi Jagir Kaur said that this historic Nagar Kirtan has created enthusiasm among the sangat for the centenary.

She reached Gurdwara Sis Ganj Sahib singing and reciting Gurbani shabds with the sangat. She appealed to the sangat to attend the centenary celebrations actively.

On arrival at of Nagar Kirtan at Sri Anandpur Sahib, where the sangat showered flowers on Sri Guru Granth Sahib with devotion and reverence, various Gatka groups performed Sikh martial arts. Samparda Baba Bidhi Chand’s Nagarchi (war drum beater) Singh was beating the Nagara on an elephant in front of Nagar Kirtan. A large number of band parties also joined in and beautified the atmosphere through melodious tunes.