Home National Moving beyond defence, business to be focus of India-Russia ties 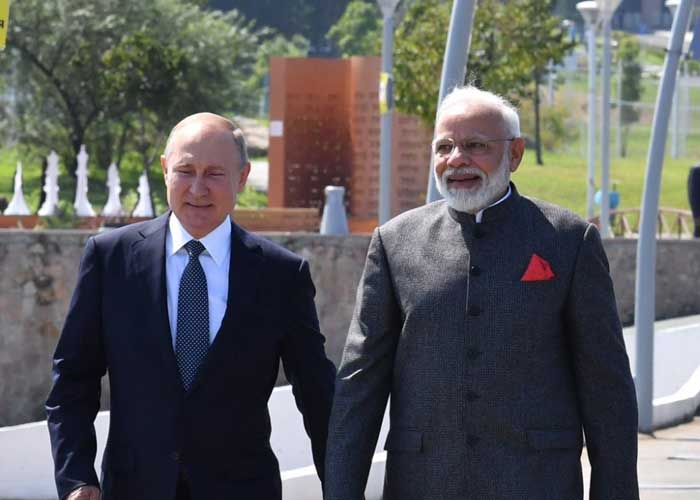 Business is going to be the thrust area now in India-Russia relationship, which has so far been seen mostly from the prism of military and civil nuclear cooperation.

Even the military and civil nuclear elements of cooperation have been one-way street, with India being the buyer and Russia the supplier. But this has to change. This is what Prime Minister Narendra Modi said here during his two-day visit, emphasising on converting the buyer-seller relationship to a collaborative one.

He also stressed that the relationship has to be taken beyond military and civil nuclear elements and diversified, with more focus on trade and investment.

Russian President Vladimir Putin also agreed that the bilateral trade between the two old allies is very low at $11 billion. Accordingly, the two leaders set an ambitious target of $30 billion to be achieved in next six years, almost three times the current level.

Modi, while addressing the Eastern Economic Forum (EEF) in presence of host Putin here on Thursday, said both of them agreed that the current level of trade is very low considering the warm relations the two countries have shared over the past seven decades.

“There are a lot of possibilities (in the India-Russia relations). Till now, the full potential has not been realised. The speed has been low,” Prime Minister Modi said.

He identified energy and minerals as sectors with a lot of scope. Russia is rich in these resources and India could invest in these.

Modi said during his visit, about 50 agreements have been signed in various areas, which are expected to translate into investments worth several billion dollars.

“I am not here to deliver a lecture and leave,” he told the gathering, implying that he meant business. He said both Putin and he shared a trait — that both are “never satisfied”. The two leaders laid the road map for enhanced cooperation during their talks on Wednesday.

Among the other sectors identified for intensified cooperation are agriculture, pharmaceuticals and infrastructure. They also discussed easing of visa norms for Indian business persons and smoothening of currency matters.

Significantly, Modi proposed export of Indian manpower to Russia, highlighting how it has helped increase incomes of its host countries, like the Gulf nations. The Indian diaspora has also been contributing to India’s income through remittances.

A decision was taken to start shipping services between Chennai and Vladivostok, to improve connectivity between India and Russia’s Far East, where India will be stepping up investments, especially in energy and mining.

The Russian President spoke about energy sector and said his country is a reliable supplier. He referred to a major scope for cooperation in the field of energy, particularly Liquefied Natural Gas (LNG) in the Far East and Arctic regions. The two leaders agreed on enhancing two-way investments in the energy sector through a five-year road map.

Indian Foreign Secretary Vijay Gokhale told media persons that the decision to give thrust to boosting economic ties would lend a new dimension to the ties between the two countries.

Modi and Putin also discussed the prospects of Russia getting involved in inland shipping in India for tourism purposes.

An agreement was also signed on Cooperation between Joint-Stock Company Rosgeologia and Srei Infrastructure Finance Limited.

To convey India’s seriousness to avenues in Russia, Modi referred to Commerce and Industry Ministry Piyush Goyal, who last month led a 150-member delegation, including four Chief Ministers, to the country and said it was a “unique” step. The delegation had met Governors of 11 provinces to discuss commercial opportunities and India is now expecting a return visit by these Governors.  (Agency)