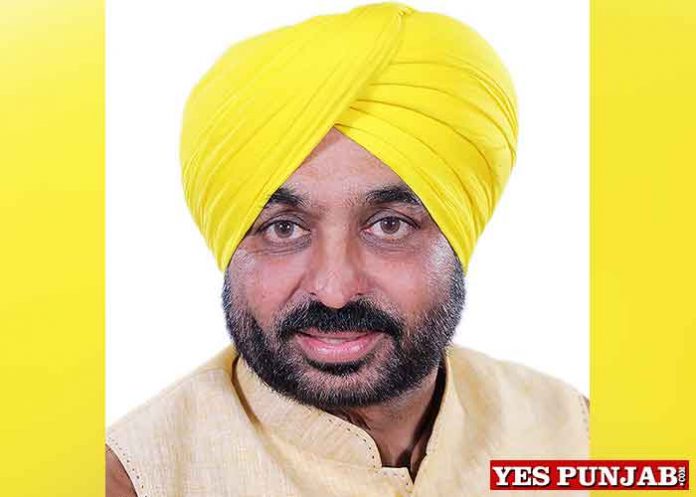 Chandigarh, April 12, 2021 (Yes Punjab News)
The Aam Aadmi Party (AAP) has strongly criticised the Delhi Police and the Central agencies for raiding various places in Punjab on the orders of Narendra Modi-led central government, without informing the Punjab Police and rounding up and torturing the youth; terming it as a robbery on the constitutional rights of Punjab for which Punjab Chief Minister Captain Amarinder Singh was responsible.

In a statement issued from the party headquarters here on Monday, AAP’s state president and Lok Sabha member Bhagwant Mann said that Prime Minister Narendra Modi and Captain Amarinder Singh wanted to intimidate the youth of Punjab who were raising their voice for the rights of the farmers; so that the brave youth of Punjab could separates from the ongoing farmers’ agitation against black farm laws.

Slamming Captain Amarinder Singh on the issue, Mann questioned how the Delhi Police had arrested the youths without the permission of the Punjab government. “Was the Chief Minister Captain Amarinder Singh not aware of this? Or the Modi-backed intervention of the Delhi Police and central agencies in Punjab proves that Captain is a weak Chief Minister,” he said.

Mann further said that in fact Captain Amarinder Singh, being close to Prime Minister Narendra Modi, wanted to protect his family from the ED’s action in the matter of billions of rupees of property created by looting; that is why Captain has allowed Delhi Police to take action against the young farmers of Punjab.

Lambasting Captain Amarinder Singh, Mann said that he had made many promises to the people of Punjab before the 2017 elections but now he was stabbing the Punjabis in the back with the Centre, to save his family from ED cases.

Demanding from the Punjab government, he said that a case should be registered against the Delhi Police personnel for illegally entering Punjab and intimidating the youth and other sections of Punjab.