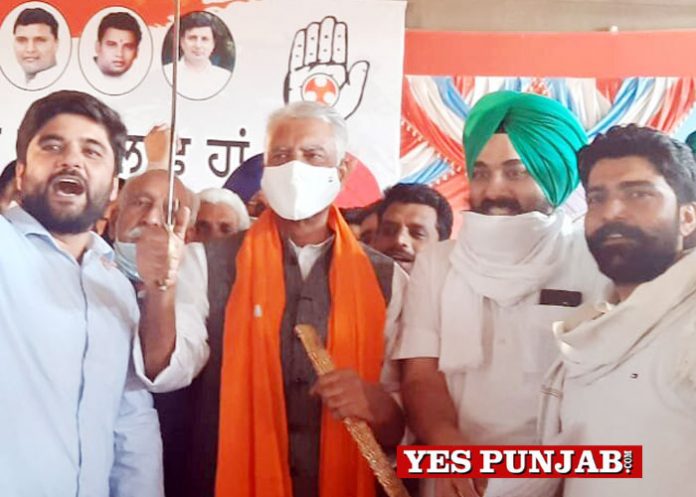 President of the Punjab Pradesh Congress Committee Mr. Sunil Jakhar today said that to hide its failures, the Modi government at centre was hell bent upon destroying the federal structure of the country.

The President of the Punjab Pradesh Congress Committee, while interacting with the farmers, arthiyas and labourers under his mass contact program here today to awaken the people against the anti-farmers ordinances said that the bills passed by the Modi government would have castigating effect on the farmers and the labourers.

He said that during the mass interaction major thrust would be laid on making the people aware about how the bills passed by the Punjab government led by Chief Minister Captain Amarinder Singh would safeguard the interests of the farmers from the anti-farmers stance of Union government.

Mr. Jakhar said that earlier in the international arena one nation used to put economic restrictions on the other but for the first time in the history of the country Modi government has unleashed this regime against the states.

Citing the examples, the President of Punjab Pradesh Congress said that by not giving the share of the state in GST to Punjab and now by stopping movement of Goods train in the state, the Modi government was targeting Punjab as its farmers were raising voice against the draconian bills of the Union government.

He said that this attitude of the Modi government was the blatant violation of the federal structure in the country. Mr. Jakhar said that the bills passed by Union government would ruin the agrarian economy of the state besides being fatal for the aarthiyas, transporters, small traders and labourers.

The President of Punjab Pradesh Congress said that to mitigate the woes of all the stakeholders, the Captain government has passed three laws in the recently held Vidhan Sabha session.

He said that as the Chief Minister had acted as saviour of Punjab’s water by Terminating the Water Agreement Act in 2004 in the same manner he has now safeguarded the farmers of state by passing these bills in the state assembly. Mr. Jakhar said that the historic decision of the state government has turned as a beacon for the other states to replicate it.

Quipping on frequent change of stance by Akali Dal Chief Sukhbir Singh Badal on the issue, the President of Punjab Pradesh Congress said that without knowing about the serious repercussions of these bills of Modi government, the Akali leadership supported the bill for three months by describing them as a boon for the farmers.

He said that the foundation of this anti-farmers bill was laid by the Akalis during their regime when they had converted the 31,000 crore scam wheat scam into a loan and put the state in a whirlpool to repay it in 20 years.

Mr. Jakhar said that both BJP and Akali Dal were two sides of same coin and have single common agenda of ruining Punjab.