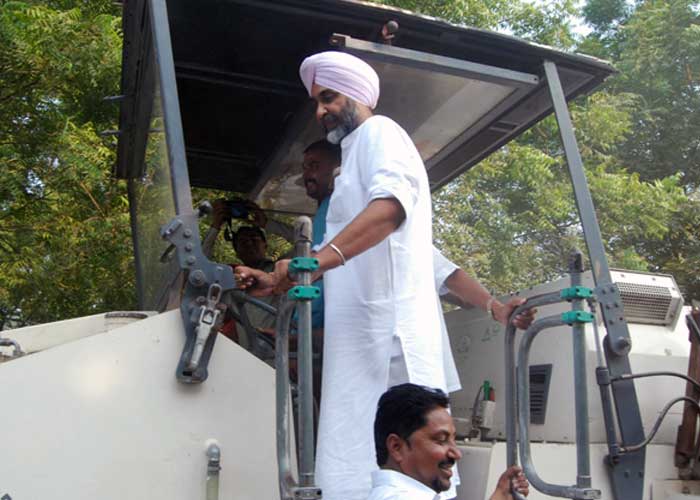 The Rs 95 crores project of Ring Road-Phase-II, which was lying pending for the past nearly two decades was started today by Punjab Finance Minister Manpreet Badal. The completion of project will drastically reduce the traffic congestion in the city and also help commuters reaching Mansa Road from Barnala road in little time.

The Finance Minister said that the credit of completing this project going to the Deputy Commissioner of Bathinda as he not only extended full support and hard work but also burnt night oil to expedite the paper work.

During this occasion Manpreet Badal addressing a mammoth gathering stated that this four-lane road with lot of green cover will have a length of nearly 5 kilometers and it will also be comprised of one Railway Under bridge.

It will be 200 feet wide road with 24 feet for the green cover. The road is to be built on a 45-acre area starting from National Highway-7 (Bathinda-Patiala Road) through the Industrial Area upto ITI Chowk (Bathinda-Mansa Road). “The completion of this project will help in getting rid of the traffic congestion in city, especially from the heavy vehicles and it will also reduce commuter’s travel distance,” the FM said.

He said that almost all the promises made with the residents of Bathinda are being fulfilled one by one and he will not leave any stone unturned to complete all the pending projects of Bathinda. This unfinished project of ring road was long due which will now go a long way to help in easing out the city traffic, he said.

He said that the project would be handed over to the people for their convenience after completion of this project within the stipulated time period of around six months. With the completion of this ring road, the distance of vehicles going from Barnala side to Mansa, Dabwali and Takht Sri Damdama Sahib will also be reduced, he said.

He said that the distance of nearly 6 to 8 kms will reduce for the vehicles going directly from Barnala Road to Mansa Road and vice versa.

In his address Manpreet Badal also said that the colonies the of Improvement Trust would also be increased soon. He said that in Bathinda, the industry is expanding in the coming years so that Bathinda can become an industrial hub.