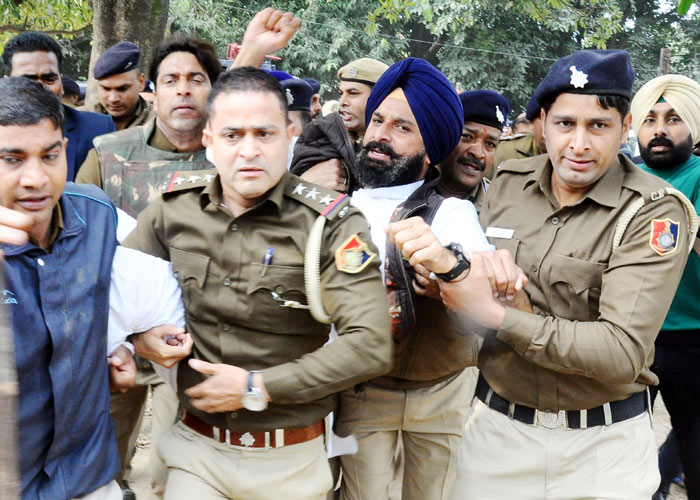 The Shiromani Akali Dal (SAD) today condemned finance minister Manpreet Badal and the Chandigarh police for resorting to ‘gundagardi’ to stifle the voice of farm suicide victim families who had come to the residence of the finance minister to appeal for inclusion of the promises made to them in the Congress party’s election manifesto in the State budget.

Addressing a press conference here, SAD legislative party wing leader Sharanjit Singh Dhillon and Bikram Singh Majithia said rather than listen to the grievances of the suicide victim families, the finance minister ordered the Chandigarh police to remove them forcibly resulting in highhandedness against old men and women, children and even handicapped persons.

“This is for the first time in the history of Punjab that opposition legislators have been prevented from participating in the budget session in such a manner. This is indeed a black day in the history of the Vidhan Sabha”, they added.

Mr Majithia said the finance minister enacted a drama of reaching late for the assembly as the Chandigarh Police had lifted victim families and legislators from the spot at 10.45 am. “He could have even walked to the Vidhan Sabha in fifteen minutes but he deliberately reached late as part of a well planned conspiracy to get a privilege motion initiated against SAD-BJP legislators.

We are not scared by such tactics and will continue to gherao the finance minister till the Congress government fulfills its promise to waive of all loans of suicide victim families besides disbursing Rs ten lakh compensation and a government job to one family member”.

Stating that nearly 3,000 farm suicide victim families were suffering due to the Congress government’s refusal to honour the promises made to them even in its fourth budget, Mr Majithia said it was very unfortunate that AAP had not only supported the privilege motion against SAD-BJP legislators also did not speak a single word against the budget in the Vidhan Sabha. “This proves that AAP has become an extension of the Congress party and should take on the nomenclature of Chhoti Congress”, he added.