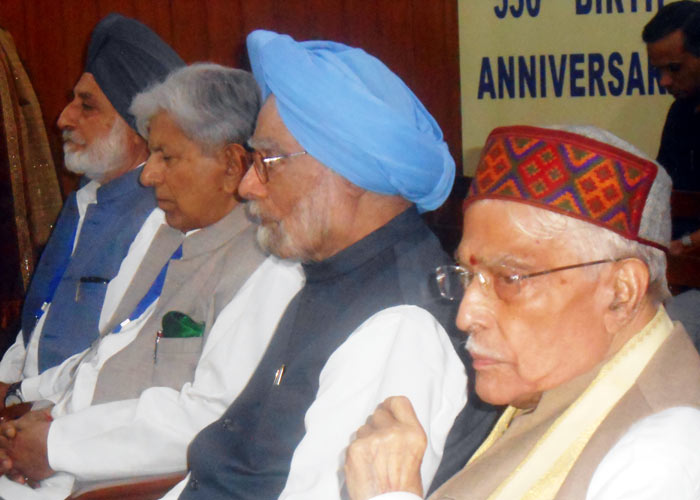 As a part of the year long celebrations organized to by Government of Punjab to mark the 550th Gur Purab of Sri Guru Nanak Dev ji, a two-Day International Conference on Sri Guru Nanak Dev ji’s philosophy to spread peace, harmony and human happiness was organized by Centre for Research in Rural and Industrial Development (CRRID), Chandigarh on November 7-8, 2019 at CRRID, Chandigarh.

The conference was sponsored by the Government of Punjab and Indian Council of Social Science Research (ICSSR), New Delhi.

The conference witnessed attendance of a galaxy of luminaries including senior bureaucrat Vini Mahajan, Jaspal Singh, Gurpreet Sapra and other government officials, renowned scholars, policy makers, along with more than 30 foreign delegates from USA and Canada.

Dr Manmohan Singh, Former Prime Minister of India presided over the valedictory Session of the conference. Raising the need to revisit Guru Nanak’s philosophy, he said that more than any other period of human history, the need for unity of thought and action today is the most urgent.

When the world is breaking up into fragments, and fragments clash with fragments surrendering all sense and purpose of living for the larger humanity, it is the humanity which seeks transcendence from narrow limits and boundaries.

The world today is beset with violence and rejection. We are hearing the cries and pains of millions from all parts of the world , the cry of the deprived and the cry of those who are abandoned by the unjust social and economic order.

He said that at a time when the world is facing serious challenges resulting from unchecked exploitation of natural resources, growing race for arms, continued exploitation of poor by the rich and growing environmental degradation, it will be worthwhile to work for an alternative model of society based on truth, gender equality, protection of the environment and universal responsibility, as advocated by Sri Guru Nanak Dev ji.

For lasting peace in the turbulent world, he concluded his address by offering a prayer from Guru Granth Sahib: “ ਜਗਤੁਜਲੰਦਾਰਖਿਲੈਆਪਣੀਕਿਰਪਾਧਾਰਿ॥ ਜਿਤੁਦੁਆਰੈਉਬਰੈਤਿਤੈਲੈਹੁਉਬਾਰਿ॥ “ This world is burning O’ Lord, Show Thy mercy, Thy Grace And save it through whatever Door Thou can.

While addressing the disparities and conflicts DrMurliManohar Joshi, former Union Minister of India, emphasized on the relevance of application of Nanak’s philosophy in today’s globalised world.