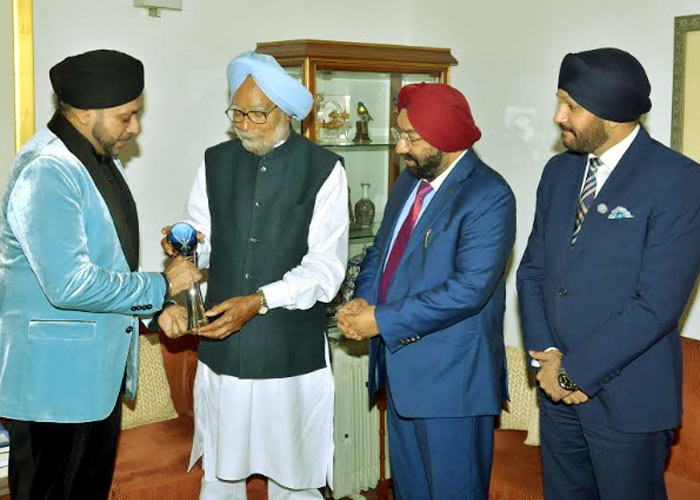 In a first, the 10th Sikh Awards were held in the Middle East and recognized and celebrated the achievements of individuals and organizations throughout the world. The awards were initiated in response to public demand in 2010 and have since been held in London, Delhi, Toronto and Nairobi.

Recognition is given to the special contribution Sikhs have made in the fields of business, sport, charity, media, entertainment, education, selfless voluntary service, lifetime achievement and the prestigious special recognition award, which is given to someone from another faith promoting multiculturalism. The Sikh Awards have continued to grow from strength to strength each year, continuing to honour excellence throughout the world.

The event was organized by the UK based global organization ‘The Sikh Group’ at the JW Marriott Marquis Hotel on February 21, 2020.

Sardar Dr. Manmohan Singh Ji was honored today at his residence with prestigious Lifetime Achievement Award by Sikh Awards founder Navdeep Singh. Dr Manmohan Singh Ji is an Indian economist, academic and politician who served as the 13th Prime Minister of India from 2004 to 2014, becoming a first Sikh in office who served two consecutive terms as prime minister.

Born on the 26th September 1932 in Gah, now in Punjab, Pakistan, Manmohan Singh’s family migrated to Amritsar in India during partition in1947. In his early education he studied at the Hindu college and later at the Punjab University. After obtaining his doctorate in economics from Oxford, he worked for the United Nations during 1966–69.

Before his political career began, Manmohan Singh was an advisor to the Foreign Trade Ministry, Chief Economic Advisor in the Ministry of Finance (India) and Governor of Reserve Bank of India and Head of the Planning Commission.

Receiving the award Dr Manmohan Singh Ji said “it is a great honor to receive this prestigious recognition that so many other prominent Sikhs from the world have previously been recognized with”.

Navdeep Singh, founder of ‘The Sikh Group’, which consists of ‘The Sikh Directory,’ ‘The Sikh 100,’ ‘The Sikh Charity,’ and ‘The Sikh Awards,’ said “The Sikh Awards have continued to grow, honoring global excellence since its inception in 2010. Every year the winners are selected from across the globe, by an independent judging panel of esteemed experts from different faiths.”

“This multi-cultural global event aims to honor and celebrate the enormous achievements of the Sikh community, who continue to contribute immensely to the social, cultural and economic fabric of today’s global village. We are celebrating two major anniversaries, Guru Nanak Dev Ji’s 550th birth anniversary and our 10th anniversary” he said.

During the presentation Mr Vikramjit Sahney said “this honor is being bestowed on behalf of Sikhs throughout the world for his immense contribution to the Indian economy, statesmanship and humbleness”.

Harmeek Singh said “he firmly supports the Sikh Group and its objective to get everyone on one platform for the greater good of society and was honored to be part of the delegation for this great presentation”.

This event was attended by over 400 guests of all faiths, from elite international dignitaries to public figures, community heroes, sports stars, celebrities and elite businessmen from India, Canada, Kenya, UK and USA.