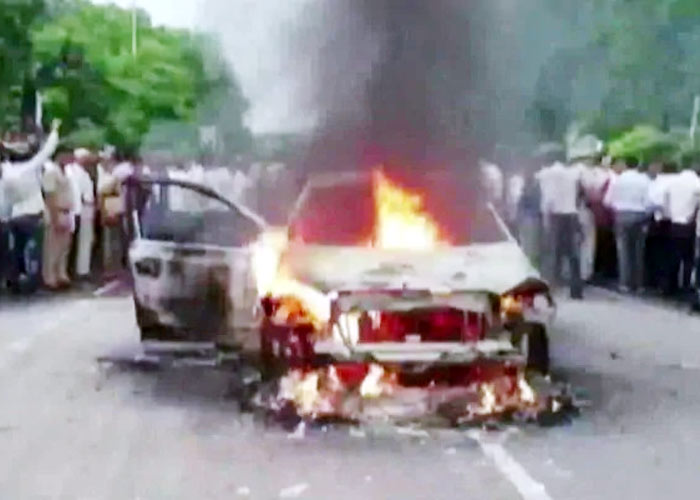 The Uttar Pradesh Police, in an unexpected action, has imposed the stringent National Security Act (NSA) on Shubham Chaudhary, for setting his own car on fire outside the Senior Superintendent of Police (SSP)’s office in September last year.

Mathura SSP Shalabh Mathur said that Chaudhary has been behind bars for the past five months and NSA charges were slapped on him after he applied for bail recently.

“There were apprehensions of breach of peace if he was released from the jail, the SSP said.

Mathur said the suspect had earlier opened fire in the air at a public place besides burning his own vehicle in front of the district court and police office.

According to police, 23-year-old Chaudhary had created a ruckus on September 25, after his alliance with a married woman was exposed.

He had fired in the air and threatened that the woman accompanying him would shoot herself if anyone tried to stop him.

The police later managed to arrest him and also the married woman, who was accompanying him.

Both were booked by the police under section 307 (attempt to murder) and section 7 of Criminal Law Amendment Act.

Chaudhary was scheduled to get engaged to a local girl, the day before his arrest, but the same did not materialise as the woman’s husband disclosed the relationship of his wife to the girl.

He had then decided to take revenge against the woman’s husband by accusing him for all the wrongdoings and took this step.

On September 25, Chaudhary dressed in a lawyer’s attire, set his vehicle on fire in the evening. He had come there along with the woman and her three children. They claimed themselves to be representative of a private company. The accused had a portable public address system and addressed the people standing on the road. He talked about corruption in the country and the political system and hurled abuses at the politicians of the day.  (Agency)