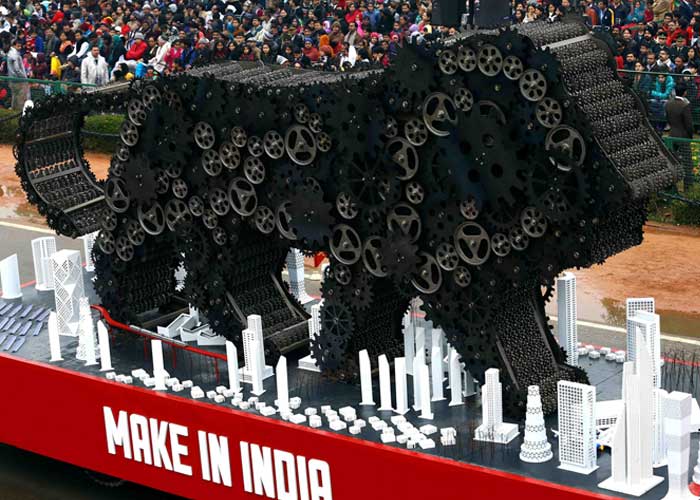 At a time when the slowdown stories are making news across the world, the Rajasthan capital is buzzing with stories, inspired by the ‘make in India’ campaign, showcasing new-age entrepreneurs making and doing things differently to make a mark.

The first ‘make in India’ news came out recently when a second-year IIT-Kharagpur student launched the first robot restaurant in Jaipur, introducing ‘Ruby’ that strolls through the restaurant displaying skinny look and chirpy sound. She welcomes clients and also serves piping hot dishes to the table.

Ruby was delivered under the ‘make in India’ campaign with the help of students of Arya College, Jaipur, using artificial intelligence (AI), said Harshit Surana, a IIT-Kharagpur student and the restaurant’s owner.

After completing first year at IIT, Harshit came to Jaipur in 2018 with an idea to open a robotic restaurant. With the help from Arya College, he designed Ruby. Now he is working on the second and improved version, which will be fully automatic.

There would be two robots — one female and other male version — serving customers in the restaurant, he said and added, they would be more like Siri, which would will listen to your request and act.

At present, Ruby takes orders and serves dishes and also politely says ‘excuse me’ if you come in it’s way.

Harshit, who passed Class XII in 2016 from Birla Public School, Pilani, knew from the beginning that he was not made for 9-to-5 job. He started dreaming something different and cracked IIT and in keeping with the ‘make in india’ concept, he came to Jaipur and designed Ruby, the robot.

It’s the first robot restaurant in north India. He has ably been supported, including providing finances, by her mother. “Recently, we took Mudra loan to open this restaurant. We are confident to break even in 1.5 years,” she said.

When spoke to his mother Neetu Surana, she had her own inspiring story to tell.

In 2007-08 slowdown, her husband made a huge loss in business and all his factories were shut. “As my son was studying, I had make earn for him. I started a tiffin centre and offered food to my two neighbours. The word spread and soon I started getting orders from renowned companies. Now, I am supplying tiffin to Kolkata Metro, Jaipur Metro, JK Hospital and many other entities across India,” Neetu Surana said.

Arvind Agrawal, president, Arya Group of Colleges, said, “Our students are ready to script a new-age story by developing and providing world-class robots to hotels and education institutes. We have provided robots to Chennai-based restaurants,” he said.

Students were working on robots, which could be deployed in hospitals, he added.

Making yet another innovation, Gaurav Mehta, a Jaipur resident, has launched India’s first luxury bespoke watch firm — Jaipur Watch Company. Not only the credo is Indian, even the entire manufacturing of this luxe watch is India-based.

“When we started in 2013, there were few facilities and ancillaries to help produce world-class product. We started outsourcing production to Asian countries and Switzerland. But in 2015, we shifted the unit to Bangalore, inspired by the ‘make in India’ campaign,” he said.

Stating that the idea was to manufacture world-class watches with Indian ideologies in India for Indian customers, Mehta said, “We use Indian coins, gods, values in our watches to display the core of Indianness.”

“Such is the response that today, we are growing at 32-40 per cent rate and have launched a retail unit in Delhi,” Mehta said and added, the ‘make in India’ slogan was “inspiring us to do things differently and ensure that India shines on global map.”  (Agency)