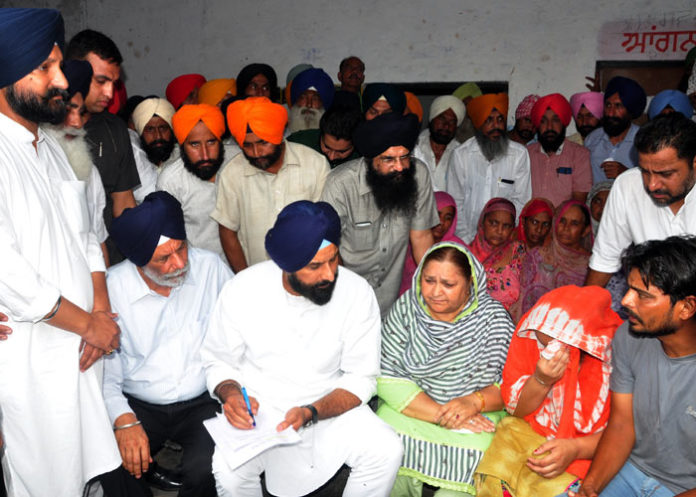 The Shiromani Akali Dal General Secretary and Former Minister Mr. Bikram Singh Majithia has said that law and order has totally collapsed in the state and incidents which happened during the turmoil period of 1990s are being repeated in absence of proper function of the government and total failure of the police administration.

Taking to reporters after meeting the family of the two children missing since last 8 days, Mr. Majithia said that it is most unfortunate to witness that incidents which were a routing during the turmoil period of 1990s have become an order of the day.

He said that murders, rapes and robberies have become incidents of daily routine in the state as the Government has failed to act and police administration is totally dependent on the political masters as appointments of SHOs and DSPs are being done by the Congress leaders.

The SAD leader said that it is shocking to see that even after having police station in village itself, the concerned SHO failed to take timely action in the missing case which has led to present situation. He said that not a single FIR is registered unless green signal is given by local the Congress MLA and other leaders.

He said that when such incidents are occurring in the home district of the Chief Minister, what can one expect from the other districts of the state. He said that the SAD do not want to give this incident a political colour, that is why he waited for 8 days for police to trace the missing children.

Mr. Majithia said that strict action should be taken against the erring police officer and other staff of the police station who failed to timely take action and wasted precious 12 hours to even acknowledge the seriousness of the incident.

He said that instead of giving information minute to minute of the action taken by the police, the family was left helpless due to inaction of the police.

He said that instead of showing sympathy with the family and behaving in most human way, the police is threatening the family with DNA tests and other measure when the family has clearly told the police that body recovered from a canal is not their son.

He said that the Jail Minister of the state is claiming that jails are now Sudhar Ghar but daylight murders are being committed in jail premises and no action is taken against anybody. He said that human rights violation, murders, political murders and robberies have become daily routine and law and order has totally collapsed in the state.