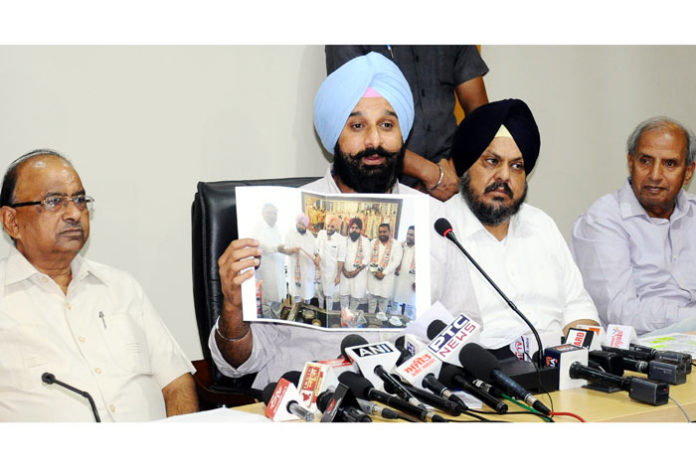 The Shiromani Akali Dal (SAD) today said the constitution as well as The Representation of Peoples Act was being violated in Punjab with four legislators who had resigned from the primary membership of AAP months back not being disqualified and debarred from contesting elections for the remaining term of the 15th Vidhan Sabha.

Addressing a press conference here, former minister Bikram Singh Majithia said the tenth schedule of the constitution said ‘ a member of a House belonging to any political party shall be disqualified for being a member of the House if he has voluntarily given up his membership of such a political party”. He said since all four mlas had resigned as primary members of AAP, the constitutional provision was being subverted.

He said Khaira and Master Baldev Singh had formed a new political party called Punjab Ekta Party while Manshahia and Sandoa had joined the Congress party. “There is no ambiguity about the resignations or the subsequent actions of the four legislators”, he said while presenting photographic proof in all cases including Speaker Rana KP Singh’s presence during AAP mla Amarjit Sandoa’s induction into the Congress party.

The Akali leader said the delay in taking the required action was a cruel joke on the electorate of the four constituencies which was currently not being represented in the Vidhan Sabha. He said it was imperative that all five seats be declared vacant so that fresh elections could be held on them.

Mr Majithia said the State exchequer was also being defrauded with the legislators drawing salaries and enjoying various facilities, including staff and security personnel entitled only to legislators. He said the average cost incurred on a single legislator alone was more than Rs 5 lakh per month and the total expenditure incurred by the State on extending facilities to all of them including Mr H S Phoolka who had resigned ten months back was in crores of rupees.

The Akali leader said all this was being done to ensure a friendly opposition as part of a fixed match between the ‘chhoti Congress’ (AAP) and the parent party. He said earlier the resignation of Mr H S Phoolka had been accepted after a ten month delay. Mr Majithia said even the leader of the opposition was being kept in his chair solely by the Congress party as the effective strength of AAP had been reduced to eleven legislators only.

“While Mr H S Phoolka’s resignation has been accepted, the Speaker is yet to take a decision on four legislators even as Mr Kanwar Sandhu has been suspended from the party and three other AAP legislators – Peermal Singh, Jagdev Singh Kamalu and Jagtar Singh Jagga have openly gone against AAP”.

Asking the Congress party and Rahul Gandhi to disclose what was the give and take with the AAP party, Mr Majithia said there could not be two sets of rules for Karnataka and Punjab. He said in Karnataka the assembly Speaker K R Ramesh Kumar, who belonged to the Congress party, had disqualified 17 mlas and debarred them from contesting elections for the remainder of the current term of the State assembly for switching parties. He said the Congress party had lauded this decision and even termed it as a true victory for democracy and said it would end the culture of legislators selling themselves to attain their selfish ends and subverting the mandate of the people.