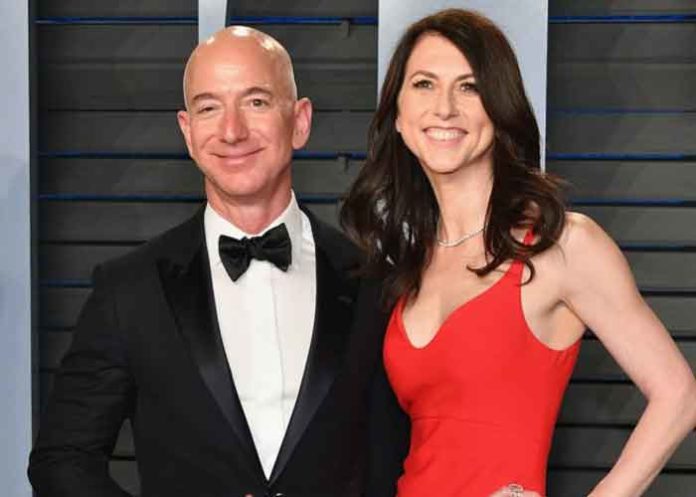 MacKenzie Bezos, wife of world’s richest man Jeff Bezos for 25 years, is set to walk away with a whopping $38 billion this week — roughly $1.52 billion a year since she got married to the Amazon Founder and CEO.

The Bezos couple finalised their divorce in April in what was reported as the biggest divorce settlement in history, entitling MacKenzie Bezos to 25 per cent of couple’s joint Amazon stocks worth around $38 billion.

Even after paying $$38 billion in stocks, Bezos will retain 59.1 million shares of Amazon — currently worth nearly $112 billion which still makes him the richest man on Earth.

According to ccn.com, the Amazon CEO will not lose control of the e-commerce giant despite now owning fewer shares.

“This is because despite his soon-to-be ex-wife walking away with a 4 per cent stake in Amazon, she has voluntarily ceded her voting rights to Jeff Bezos,” said the report on Tuesday.

What is MacKenzie going to do with all that money?

Well, she has decided to donate half of her $38 billion worth alimony to investor Warren Buffett’s philanthropic campaign — the Giving Pledge.

The Giving Pledge, founded in 2010 by Buffet along with Bill and Melinda Gates, has drawn 204 billionaire pledgers, including WhatsApp Co-founder Brian Acton, Tesla CEO Elon Musk and Facebook founder Mark Zuckerberg and his wife, Priscilla Chan.

“My approach to philanthropy will continue to be thoughtful. It will take time and effort and care. But I won’t wait. And I will keep at it until the safe is empty,” 48-year-old MacKenzie wrote in an open letter recently.

Applauding his ex-wife on her donation decision, 55-year-old Jeff Bezos said: “MacKenzie is going to be amazing and thoughtful and effective at philanthropy, and I’m proud of her. Her letter is so beautiful. Go get ’em MacKenzie,” on Twitter.

MacKenzie has also given her stocks in other companies: “Happy to be giving him all of my interests in the Washington Post, Blue Origin (private space company) and 75 per cent of our Amazon stock plus voting control of my shares,” she tweeted recently.

The pair first announced plans to separate in January following reports of Jeff cheating on his wife, claims that he denied later.  (Agency)