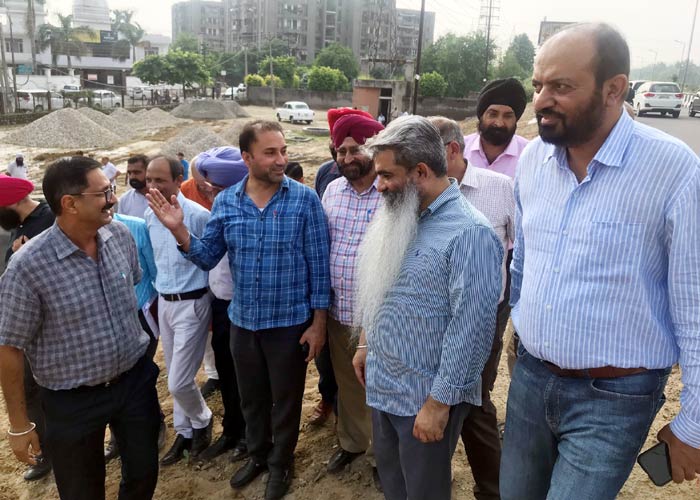 To provide clean and green environment, place for exercise and spending leisure time for city residents, four Leisure Valleys will be developed in Ludhiana (West) constituency of the city. Punjab Food, Civil Supplies & Consumer Affairs Minister Punjab Mr Bharat Bhushan Ashu informed that the work on two leisure valleys have already started, while the work on remaining two would start in the coming few days time.

Accompanied by Ludhiana Improvement Trust Chairman Mr Raman Balasubramanian and Municipal Corporation Ludhiana Commissioner Mrs Kanwal Preet Kaur Brar, Mr Ashu today visited two under construction leisure valleys (near DAV Public School and near Lodhi Club) and inspected the ongoing work there and issued necessary directions to concerned officials. He said that these projects would prove as lifelines for the city and its residents.

He informed that near DAV Public School, the vacant chunk of land was literally being used as a garbage dump. He said that this space would soon be fully transformed into one of the best leisure valley’s of the city. Here, the Municipal Corporation has also constructed a rain water recharging well.

Mr Bharat Bhushan Ashu informed that the this project (near DAV Public School) was designed by former students of Horticulture Department of Punjab Agricultural university and the features will be modern infrastructure, benches, canopies, imported grass, plants, lighting etc. He informed that this leisure valley would also have tennis, badminton and volleyball courts, along with a senior citizen home, an open gym, besides several other facilities.

The Cabinet Minister said that the Capt Amarinder Singh led Punjab government is committed for providing best facilities to its residents and that is why several beautification projects are in the pipeline. He informed that the work on Sidhwan Canal Water Front project would also start on Sunday.

Councillor Mrs Mamta Ashu informed that this Project envisages development of the stretch along the Sidhwan canal, starting from Pakhowal Road till Ludhiana MC Zone D office near Ferozepur Road, as an open public space for citizens of the city. The total cost of this project is Rs 4.75 crore. The total length of this stretch is approximately 1100 metres and the width varies from 20–22 metres. She informed that this project includes developing a green belt, dedicated cycling track, playing zone, dedicated footpath along canal, sitting areas, wall climbing activities etc.