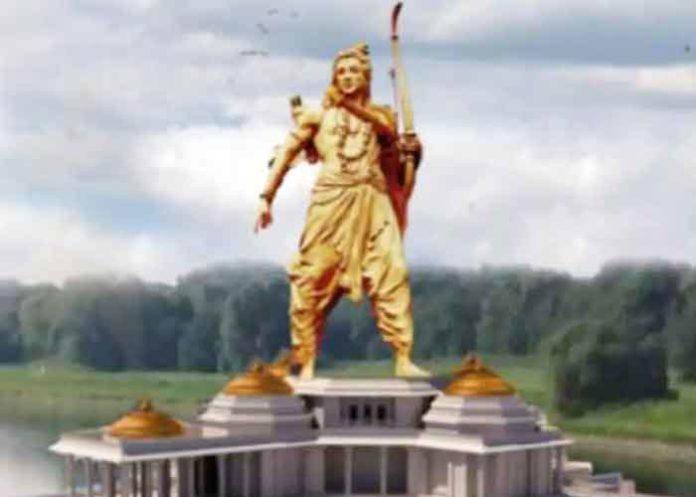 The proposed statue of Lord Ram in Ayodhya will now get taller, in fact it will be the tallest in the country. Uttar Pradesh Chief Minister Yogi Adittyanath said the statue would be 251 metres tall and would be installed on an 100 acre site.

This was decided at a meeting held in Lucknow late on Monday.

The Sardar Patel statue in Gujarat is 183 metres tall. An Memorandum of Understanding (MoU) will be signed with the Gujarat government for technical assistance.

Adityanath has said that a plan should be prepared for overall development of Ayodhya, too.

“There should be arrangements for basic tourist facilities along with the digital museum, interpretation centre, library, parking, food plaza, landscaping based on the theme of Lord Shri Ram,” he stated.

It was also decided that trust under the chairmanship of the Chief Minister will be constituted.

A separate unit of State Manufacturing Corporation will be set up for the purpose of this project, structure, bidding operation and construction work.

For the site survey of the project, environmental assessment and feasibility study, assistance will be sought from IIT Kanpur and Nagpur-based NEERI (National Environmental Engineering Research Institute), a constituent laboratory of CSIR.

The 251-metre Lord Ram statue will be the world’s tallest. The Statue of Liberty in New York is 93 metres, Dr BR Ambedkar’s statue in Mumbai is 137.2 metres, Sardar Vallabhbhai Patel’s in Gujarat is 183 meters, Gautam Buddha’s statue in China is 208 meters and Chhatrapati Shivaji Maharaj’s statue in Mumbai is 212 meters.  (Agency)