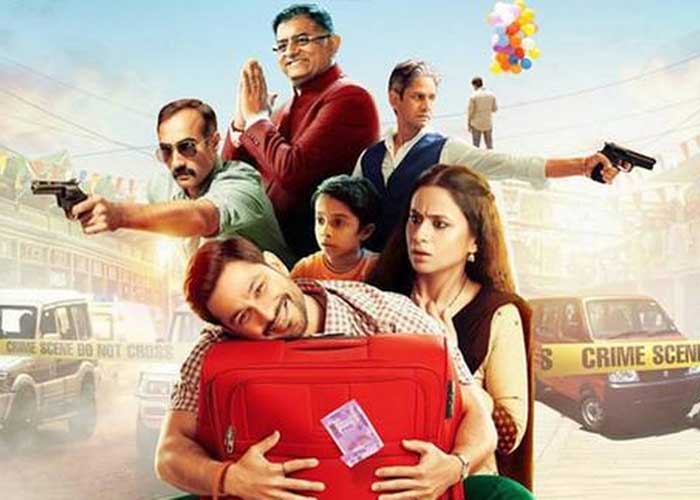 Every once in a while in Bollywood, you get to see the Second Half Syndrome. Put simply, a film starts off on a promising note, scales a sort of high as the plot builds up, only to lose steam somewhere post interval.

The malady becomes particularly obvious in the case of comedy — definitely the trickiest genre to write. Comedy needs to sustain pace and punchline in an incessant flow. A narrative that seems to run out of either begins to seem monotonous after a while.

“Lootcase” suffers from the Second Half Syndrome. The film begins with the promise of a laugh riot, build its plot on an overall vibe of merriment, before suddenly falling short of imagination through the second half, on how to carry the tale forward with gusto and end on a hilarious high.

Perhaps Rajesh Krishnan’s film needed a shorter runtime — at 132 minutes, the screenplay simply does not look like it has enough story to narrate, and enough gags to show. Running out of original gags can seriously damage the prospects of a comedy.

This is the story of Nandan Kumar (Kunal Kemmu), a guy next door who works as an operator in a printing press. Grappling with demands of wife (Rasika Dugal) and son (Aryan Prajapati), Nandan’s fate takes a wild turn one evening, on way home. He come across a large red trolley bag stuffed with big currency notes.

With no one around to claim it, Nandan thinks it is safe to take the suitcase home. What he doesn’t know is the case had been deliberately planted in a public place by the crafty Minister Patil (Gajraj Rao) as part of a transaction.

Nandan’s lower middle-class chawl lifestyle goes for a toss. His primary mission now is to hide the case from his wife because he knows, despite their hardships, she would never allow the ill-gotten gains.

What follows was obviously meant to be ROFL stuff. But the writing (Kapil Sawant and Rajesh Krishnan) struggles to sustain a viable slapstick quotient as the story moves. Talented artistes in colourful characters take centrestage, raising expectation. There’s Vijay Raaz as Bala Rathod (Vijay Raaz), a spiffy-dressed don who devotedly watches Nat Geo because — guess what — it’s a jungle out there in the Mumbai underworld. Bala is after the money, too. Then there is the crooked cop Kolte (Ranvir Shorey), whom Patil sends to track down the guy who has his stash of cash.

You realise after a while “Lootcase”, despite being billed as a comedy, isn’t about its humour. The film is about its cast. You begin to notice most of the fun factor being generated on screen is thanks to the acting, rather than a constant flow of humour inherent in situations or dialogues. This is a fine cast for sure, and on a funny high, too.

Kunal Kemmu, one of the most underrated leading men of Bollywood, does a good job bringing alive the man in a spot. Kemmu, who impressed with an out-and-out sinister avatar in “Malang” earlier this year, makes most of his comic makeover here. He keeps it restrained for adequate impact. Kemmu’s nice guy-caught-in-a-situation finds a yin-yang pairing with the impeccable Rasika Dugal as Nandan’s wife.

A large part of the comic chemistry of this film owes itself to the trio of Vijay Raaz, Gajraj Rao and Ranvir Shorey. Vijay Raaz in the role of the comedic gangster has become a common occurrence on the Bollywood screen by now, and it is sheer pleasure watching how the actor reinvents the prototype every time.

Gajraj Rao’s minister Patil is a man who can manipulate anyone to get anything he wants. The actor makes the standard evil politician a funny character without reducing him to a caricature.

The film’s other asset is Ranvir Shorey. He sure knows how to be funny even when he is not uttering a funny line.

“Lootcase” could have been a ride on the wild side of humour with such phenomenal talents at their comic best — if only the writing and directorial execution also scaled such a peak.  (Agency)