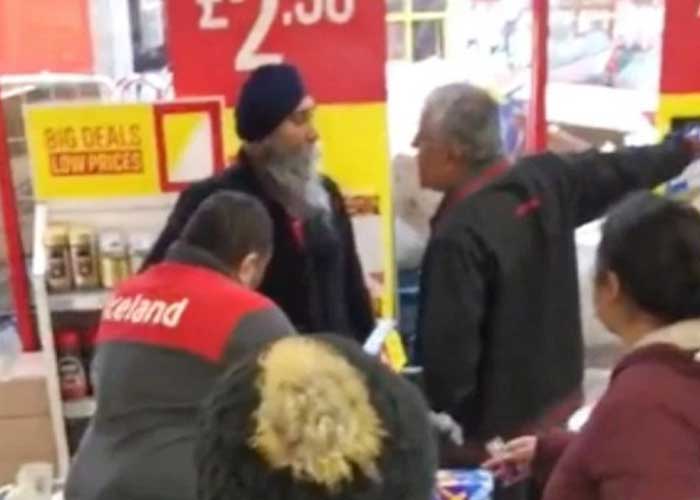 Employees at a London store lashed out at an elderly Sikh customer before pushing him out as coronavirus panic-buying chaos gripped supermarkets across the country, a media report said on Thursday.

In footage filmed on Wednesday, several workers at the Iceland supermarket’s store in Ilford, east London, could be heard having a loud argument with the elderly man, The Sun newspaper said in the report.

In the video, the man appears to be holding up the queue on the other side of the cashier, while the other line was of customers stockpiling toilet paper onto the belt at the checkouts.

Frustrated staff can be repeatedly heard telling the older customer to leave the store, saying: “Get out! Get out!.”

But then a female employee suddenly intervenes and tries to push the elderly man out of the store on the back of his shoulder.

The customer then turns around to face her and the pair start slapping and hitting each other away, The Sun newspaper report said.

At this point, the male staff member grabs the elderly customer by his neck and savagely pushes him out of the store.

It remains unknown why the scuffle started.

The clip has gone viral on social media leading to widespread outrage among netizens over how the elderly man was manhandled.

One user wrote: “This is not the time for Iceland staff to be assaulting elderly customers! We are in a national crisis and older people are struggling the most”.

Another individual exclaimed: “Disgusting behaviour!… Unacceptable to push any old man,” while another user said “I’m sorry but both staff members need to lose their jobs”.

The clip comes amid wide-spread panic-buying and stockpiling after the rapid spread of coronavirus across the country which has so far infected 2,626 people and claimed the lives of 103 others. (Agency)