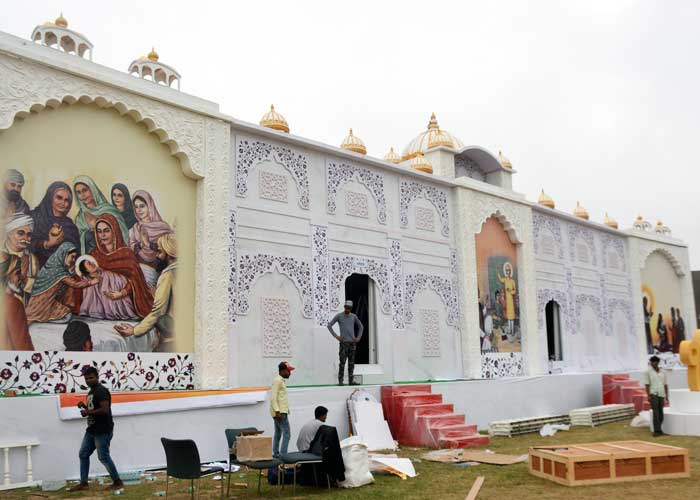 The Special Principal Secretary to Chief Minister, Punjab and Secretary Information and Public Relations department Mr. Gurkirat Kirpal Singh today reviewed arrangement for that the Digital Light and Sound Show dedicated to 550 years of birth anniversary celebrations of Sri Guru Nanak Dev Ji which will be held at 26 places in Punjab including Chandigarh wherein people of Punjab will be dyed in the hues of Soulful events for four months with the ultra modern shows.

The Punjab Government spokes person said sector 78 Stadium at Mohali digital Museum will be set up from October 7th to October 9th wherein can view the show from 6:30 a.m. to 6 p.m. he added that the life of Sri Guru Nanak Dev Ji has been exhibited to the multimedia Technology Museum.

To be run over the next four months the Chief Minister Punjab Captain Amarinder Singh will inaugurate the show at 6 p.m. at Mohali. He added that on the first and last day light and sound show will be held on the life of Guru Nanak Dev Ji.

S. Gurkirat Kripal Singh also reviewed arrangements for the light and sound show to be held at the main event at Sultanpur Lodhi from November 1 to November 12 and from November 9 to the last day of the program. All the 9 consecutive the life story of Sri Gurur Nanak Devi Ji will be shown to the audience.

He said that in all these places the digital museum will be open to the public for 3 days continuously while the 45-minute light and sound show with colorful visual presentations, ultra-modern laser techniques and unique acoustics will be open 2 days a night.

The first of its kind floating light and sound shows will be the center of attraction for the people in this series. These shows will be held at the Sukhna lake in Chandigarh and 10 districts of Punjab including Ropar, Hoshiarpur, Ludhina, Jalandhar, Gurdaspur, Moga, Kapurthla, Sri Amritsar Sahib, Tarn Taran and Firozepur from where the Beas and Satluj river pass.

He said that a floating light and sound show will be held on 17th and 18th October in the Sutlej river near Ropar Headworks. Similarly, on October 19 and 20, in Beas river near Terkiyana village of Hoshiarpur district, October 23 and 24 in village Talwandi of Ludhiana on Sutlej river and village Gandhowal in Hoshiarpur near Bias.