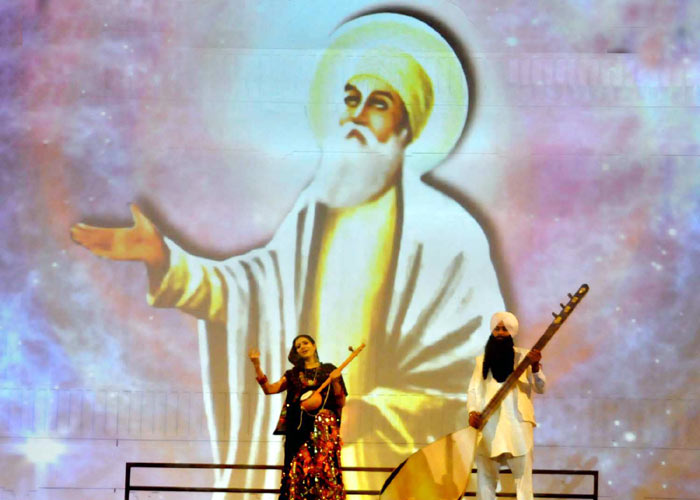 Under the string of events being held by the Punjab government commemorating 550 years birth celebrations of Sri Guru Nanak Dev Ji, the devotees basked in glory of grand multimedia light and sound show held on the banks of Bein.

Being run till Nov 15, the impressive and spectacular show was started today in presence of the Minister for Civil Supplies and Consumer Affairs department Mr Bharat Bhushan Ashu who marked his humble presence as one of the devotees. Sufi singer Lakhwinder Wadali enthralled audience with his sufiana creations.

During the multimedia light and sound show, being held by Punjab government’s Department of Information and Public Relations, digital techniques and laser show were put to use to bring Sri Guru Nanak Dev Ji’s teachings and aims to life for the huge audience present at show. Audience appreciated the show and were spell bound.

Speaking at the occasion Minister Mr Bharat Bhushan Ashu called upon people to emulate the teachings of Guru Nanak Dev Ji who replaced hatred with harmony and brought unprecedented peace to the society. He said that following the path Sri Guru Nana Dev Ji has shown, would be the right tribute on his 550 years birth celebrations.

Mr Ashu said that Guru Maharaj stood for all sections of society and against the ills in society. He advocated worship, hard work, conserving environment, giving respect to females, work for upliftment of poor and down trodden and dedicate oneself to the Almighty.

One of the devotees Bibi Raj Kaur said that she had seen such spectacular show for the first time in her life and it seemed as if Guru Maharaj was standing in front of her and guiding her. An elderly Gurmukh Singh from a village in Malwa got sentimental saying that he feels blessed to have witnessed the 550 years celebrations of Sri Guru Nanak Dev JI in his lifetime. A youngster from Janakpuri area of Delhi said that he was happy to see excellent facilities and preparedness of Punjab government.

Appealing devotees to watch the free spectacular show, Deputy Commissioner Mr DPS Kharbanda stated that arrangements have been made to accommodate more than 5000 spectators at the show.