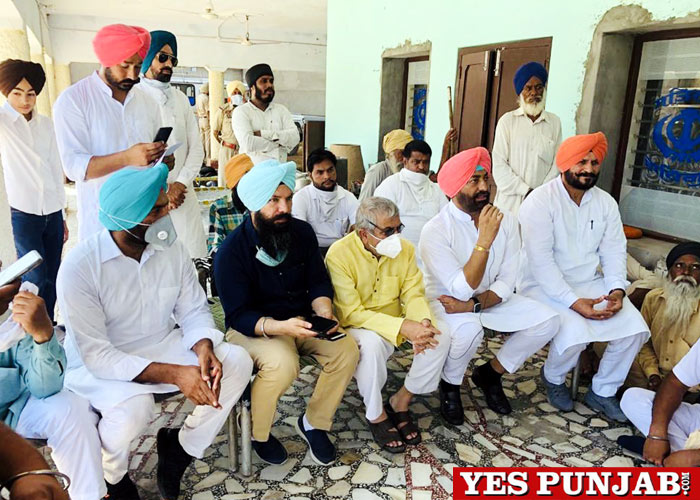 In a series of “People’s-Court”(Lok-Kacheri) being held to expose gross misuse of UAPA law both by the central as well as Punjab governments, Sukhpal Singh Khaira MLA and former Leader of Opposition, Dr Gandhi Ex-MP accompanied by MLAs Jagdev Singh Kamalu and Pirmal Singh Khalsa today visited village Shadipur, district Kaithal (Haryana), to meet the family of 18 year old youth Lovepreet Singh @ Rajkumar who has been arrested under UAPA law by the Delhi police and later booked by the Patiala police.

After speaking to the family of [email protected] and village elders, Khaira and Dr. Gandhi lambasted the Modi government as well as the Capt. Amarinder Singh, for implicating extremely poor and defenceless youth under the said draconian law.

Khaira said according to the villagers Lovepreet Singh who is barely 18 years of age had gone to Delhi to serve ‘Langar’ in the Shaheen Bagh Morcha against CAA. Khaira said the Delhi police arrested him and planted a pistol and some cartridges and later booked him under the UAPA law.

Khaira said the same Lovepreet Singh along with four other youth of Punjab mostly belonging to the Dalit community were again booked under the same UAPA law, by the Samana police in Patiala district on 28th June.

Khaira said as per the FIR registered by the Samana police five youths including Lovepreet Singh, Sukhchain Singh of Patiala, Amritpal Singh of Mansa, one Garry of Nawanshahar and Jaspreet Singh of Majitha all in the age bracket of 18 to 20 years and mostly belonging to Dalit families, were again booked under the said draconian law.

Khaira said it appears that the Punjab police under a well planned design is targeting extremely poor and defenceless youths in multiple FIRs, so that they are never able to fight for their defence or to get out of jails. It appears the aim of the Punjab police particularly the DGP Mr Dinkar Gupta is to create an atmosphere of fear in Punjab, by terming these youth as Khalistani modules and terrorist, in their so called fight against Khalistan and 2020 SFJ referendum.

Khaira said earlier he had held a similar “People’s Court” at village Akala in his constituency of Bholath, where one Joginder Singh Gurjar a 65 year old heart patient with no criminal record, to expose his wrongful arrest under the UAPA. Khaira and Dr Gandhi accompanied by MLAs had visited the home of Sukhchain Singh at village Sehra in Patiala district recently, where the village elders and the Sarpanch categorically stated that the young boy had been taken into custody by the Patiala police in their presence from the village on the 26th June but he was later shown arrested at a ‘naka’ at village Gajevas under PS Sadar Samana in Patiala district.

Ex-MP Dr Gandhi while condemning the gross misuse of UAPA law by the Punjab police lambasted Capt. Amarinder Singh and his DGP for trying to create terror amongst the Hindus in the garb of Khalisatan and 2020 referendum. Dr Gandhi said the entire campaign to frame innocents under UAPA is a well thought out political conspiracy to create a wedge between Hindus and Sikhs and to disturb communal harmony of the state. He appealed to the urban voters of Punjab not to fall prey to the mischievous designs of DGP Dinkar Gupta.

Khaira said it was intriguing to note, that while on one hand the Congress party had vehemently opposed UAPA law in Parliament last year and Kapil Sibal a stalwart Congress leader has recently written an article terming the UAPA law as oppressive. But their own Capt. Government is indiscriminately misusing UAPA in Punjab. Khaira said up till now as many as 16 FIRs have been registered under the UAPA law in Punjab, which according to them are frivolous, false and mostly targeting extremely poor and daily wager youths.

Khaira, Dr Gandhi and the other MLAs urged Captain Amarinder Singh to appoint a commission of enquiry against all the said FIRs under the UAPA law, preferably by Justice Mehtab Singh Gill head of the vendetta commission to inquire into the said 16 UAPA FIR’s.