Home Punjab Khaira a puppet in hands of Amarinder, resignation a gimmick to mislead... 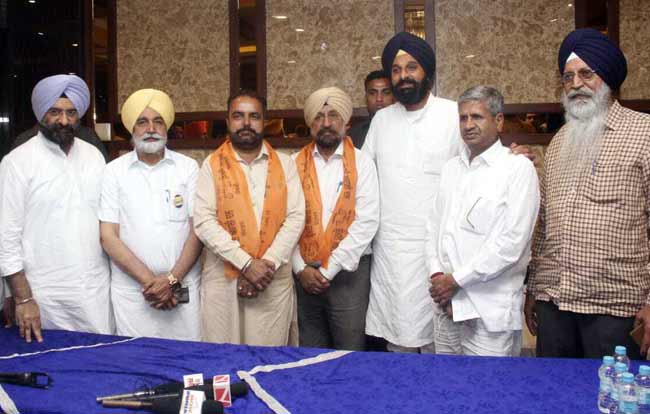 In statement issued here today, Majithia lambasted Khaira for submitting his resignation from Bholth assembly constituency at the last moment to ensure that his papers for the ensuing Lok Sabha polls are rejected at the first instance.

Khaira seems to be keen now to opt out of contest in Bathinda to help the Congress nominee Amarinder Singh Raja Warring, virtually reducing him to a puppet whose all movements are controlled by his ultimate boss Punjab chief minister Amarinder Singh.” In his entire political carrier Sukhpal Kharia has contested four elections as Congress party nominee and was more of a spokesman for congress even as an APP MLA then opposition.”

The SAD had pointedly questioned the speaker in the assembly on why action was not being taken against Kharia for having quit from his parent party. The speaker had gone on record to say that since last eight months kharia had received the notice. Majithia further rued that according to the Tenth Schedule in the constitution Kharia should have been disqualified . However he was protected by the congress and the tactics of dilly dallying were practised . The state exchequer was further burdened as kharia was withdrawing salary, and enjoying all perks of an MLA.

Majithia pointed out that Khaira had been elected to Punjab assembly and cannot submit his papers for the Lok Sabha from his nascent party PEP without resigning from the assembly seat. Khaira knew of this technicality in advance but consciously deferred submission of his resignation to the Punjab speaker. In fact, Khaira had been dilly-dallying when there was demand from his parent party Aam Aadmi Party (AAP).

Obviously, Khaira’s papers for Lok Sabha polls are likely to be rejected on these technical grounds and he would put the blame on the door-steps of the Akalis while actually he is acting at the bidding of Amarinder Singh, averred Majithia.

Besides, Khaira is progressively getting convinced that his security too would be forfeited and his credibility too would take a deep dip, he opting out of the race

Akali leader lambasted Khaira for changing his political colours like chameleon and shifting his loyalties at the bidding of his Congress bosses. It is no surprise for us that he has cut a deal with the congress party .

Khaira is self styled leader of the conglomeration of six parties christened as Punjab Democratic Alliance (PDA), which at best cab be dubbed as Punjab version of “mahamilavat”. The PDA has put up a façade of challenger to the ruling Congress in Punjab though it is trying to help Congress by resorting splitting of the anti-Congress votes.

The PEP, Lok Insaf Party (LIP), CPI which always had alliance with Congress, Revolutionary Marxist Party Of India(RMPI) constituting PDA are a creation of Congress , concluded Majithia.Today the private media advisor of Manpreet Singh badal chamkur Singh Mann and Bhupinder Bhullar ex chairman Nagar council of Bathinda formally joined the SAD and were welcomed in the party fold by Majitha.