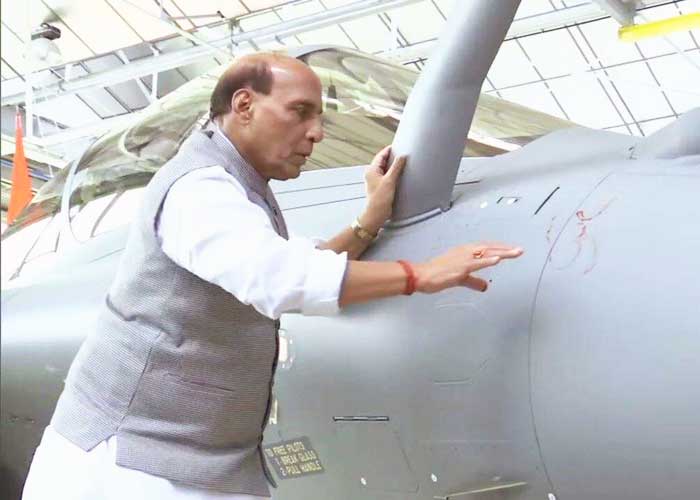 The revelation comes amidst flak faced by Rajnath Singh over the past two days on social media for performing a traditional Hindu ceremony on the 4.5 generation multi-role combat aircraft. Over social media, the Defence Minister was accused of leveraging Hindutva by performing the ceremony whereas the fighter jet was purchased with taxpayers’ money belonging to all religions.

On Thursday, pictures of Rajnath Singh being helped during the Shastra Puja by Air Commodore Hilal Ahmed, Air Attache in the Indian Embassy in France, who belongs to Kashmir, were widely shared over Twitter.

Also shared were pictures of Deputy Air Attache B.B.S. Anand, a Sikh, helping the Minister as he inscribed the ‘Om’ symbol with vermilion on the front fuselage of the fighter jet.

“That’s the spirit of #IndianArmedForces,” posted a Twitter user along with the photographs.

The Indian government had chosen Dussehra, which fell on October 8 this year, for formally receiving the first of the 36 Rafale jets from France because of the auspiciousness of the occasion as well as for the fact that the festival symbolizes victory of good over evil.

Rajnath Singh had performed the Shastra Puja, a ceremony that he is know to perform every year in Lucknow in his personal capacity, upon the fighter jet after receiving it from French Defence Minister Florence Parly.

However, Rajnath Singh had been attacked on Twitter with users alleging him of sticking to superstitious practices. Pictures of lemons placed under the wheels of the jet and Rajnath Singh applying vermilion and placing a coconut on the front fuselage soon went viral on social media. A series of memes and cartoons followed, many of them caricaturing the jet to average Indian lorry that often has various graffiti inscribed upon it.

The opposition Congress too took a dig at the BJP government over the Shastra Puja with party General Secretary Mallikarjun Kharge comparing the event to a ‘tamasha’ (drama). The BJP retorted by saying that the Congress has problems with Indian customs and traditions, adding that, the party used to worshipping “Quattrochi, Shastra Puja is naturally a problem”.  (Agency)