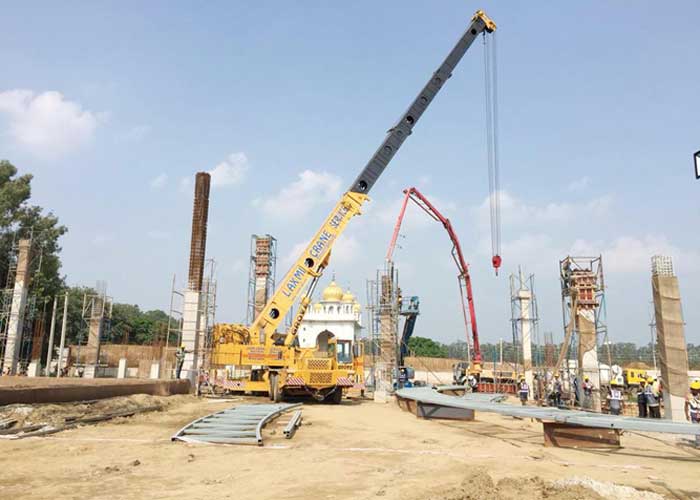 A meeting was held today between the top brass of the Union and State Government to take stock of the ongoing development centric works at Sri Kartarpur Sahib Corridor which is to be opened on the occasion of the 550th Prakash Purb celebrations of Sahib Sri Guru Nanak Dev Ji.

The high level delegation comprising the Union and State Government reviewing the work related to Sri Kartarpur Sahib Corridor and directed the officers to complete the same within fixed time frame. The representatives of the company undertaking the construction work at the corridor —-Shapoorji Pallonji assured the delegation that all works would be completed by the 31st October.

The delegation members also inspected the development centric projects at the International border between India and Pakistan after which they held a meeting with the officers at the Integrated Check Post (ICP) and took stock of the progress in the works going on there.

During the meeting, lengthy deliberations were held with regard to the inauguration of the Sri Kartarpur Sahib Corridor to be done by the Prime Minister Mr. Narendra Modi in November. The officers also visited the spot where the Prime Minister is scheduled to address a rally besides the site near the India Pakistan border.

The Cooperation Minister S. Sukhjinder Singh Randhawa on the occasion said that the preparations concerning the 550th Prakash Purb are going on in full swing and a tented city has been erected for the stay of the ‘Sangat’.

The arrangements with regard to the pandal and the parking are also being made apart from the ones aimed at ferrying devotees from parking to the pandal. The minister reassured that no stone would be left unturned to ensure the comfort of the devotees. All the works would be completed by the 31st of October.

He also added that the purpose of today’s meeting was to ensure that the preparations, to be made before the inauguration of the Sri Kartarpur Sahib Corridor, are made well in time.

S. Randhawa also said that the officers of the Land Port Authority have been told that by the 31st October, the works concerning the National Highway and the Integrated Check Post would be completed in the aftermath of which the Prime Minister Mr. Narendra Modi would perform the inauguration ceremony.

Divulging more, S. Randhawa said that the Punjab Government has made top notch arrangements for the facilitation of the Sangat expected from country and abroad. Every care would be taken to provide every facility to the devotees visiting Gurudwara Sri Kartarpur Sahib in Pakistan.

He also added that the devotees would have to apply 30 days in advance for visiting Gurudwara Sri Kartarpur Sahib. There would be no stamping on the passport and only the permit would be issued. The portraits of Bhagats, Guru Sahiban, Mata Sulakkhani, Baba Sri Chand Ji, Baba Banda Singh Bahadur would adorn the Integrated Check Post.

He also divulged that the development projects are going on speedily at the historical and religious town Dera Baba Nanak. Developmental works in the 11 villages at the cost of Rs. 24 Crore are being carried out.

On the occasion, the Chief Principal Secretary to the Chief Minister –Mr. Suresh Kumar said that the agenda of today’s meeting between the Union and State Government delegation was to review the ongoing works regarding Sri Kartarpur Sahib Corridor with a view to give directions to the various agencies to complete the works within stipulated time.