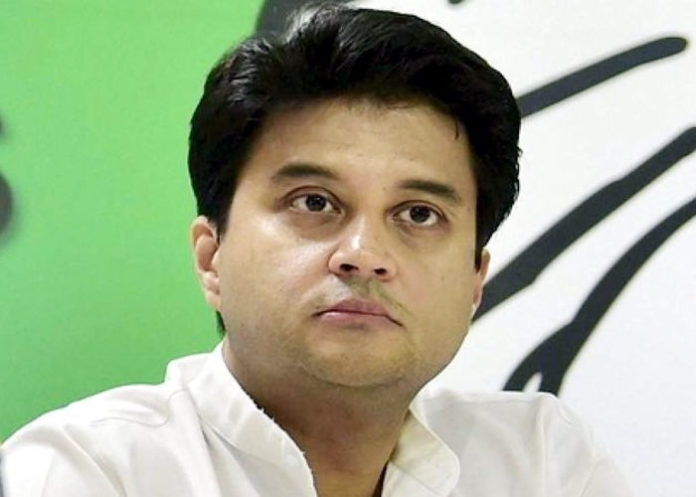 The Congress high command is on tenterhooks as the ongoing power struggle between Madhya Pradesh Congress leaders Jyotiraditya Scindia, Kamal Nath and Digvijay Singh over the selection of a new state party president threatens the very existence of the party in the state.

A rebellion has broken out in the state party ranks and sources told IANS that chances of Scindia leaving the grand old party cannot be discounted if he doesn’t get the post himself or for a leader of his choice.

When Congress came to power in Madhya Pradesh after 15 years, Scindia was confident of being called in to helm the new government. But state Congress chief Kamal Nath prevailed over the party leadership, which made him the Chief Minister.

A dejected was left Scindia licking his wounds. But now with the Congress looking for a new state party president, Scindia sees a chance for himself. Only that Kamal Nath wants his man in that seat.

Scindia has met Sonia Gandhi twice in this regard. Following his last meeting with the interim Congress chief, Kamal Nath was called to Delhi.

“Some state Congress leaders are finding it hard to digest Scindia’s popularity and conspiring to keep him out of Madhya Pradesh,” said Dangi.

State Congress leaders are holding dharnas and posters have cropped up across MP demanding Scindia as Madhya Pradesh PCC chief. In all these posters, Scindia’s photo overwhelms miniature images of Sonia and Rahul.

Though state Congress spokesperson Deepak Vijayvargiya has gone on record to claim that the party is going through a phase of intense dissatisfaction and imbalance, this unilateral rebellion by district party chiefs against the Congress high command is unfathomable without the backing of a leader (read Scindia).

The infighting within the MP Congress is not new. What’s new though is the intensity of the rebellion that Scindia has mounted on the top Congress leadership. Though he says he has left it to the ‘high-command’ to decide upon the PCC chief’s name, and will accept whatever its ‘decision’ is, the reality is different.

“If he is ignored, Scindia might leave the Congress and nothing can be said about what will happen then,” a close Scindia aide told IANS on the condition of anonymity.

Sources say that out of Congress’ 114 MLAs in MP, 25 are Scindia loyalists, and at least 15 of them will leave the party if he resigns. This will only destabilise the state’s Congress government, which has a wafer-thin majority over the BJP.

Chances of Scindia’s switch to the BJP also cannot be denied because his family shares a long and close association with the saffron party. From his grandmother Vijayaraje Scindia to aunts Vasundhara Raje and Yashodhara Raje Scindia — all have been BJP leaders.

Congress’ MP unit secretary Vikas Yadav said the party has only “used and thrown” Scindia. “He is pushed forward when there are elections, but ignored when it’s time to recognise his contribution,” he said.

Political analyst Shiv Anurag Pateria said: “The RSS and the BJP believe that the challenge posed by Congress between Gwalior-Chambal and Malwa will be over if Scindia joins the BJP.”

But the question remains, if snubbed by 10 Janpath, would Scindia make his way to 6 Deen Dayal Upadhaya Marg?  (Agency)