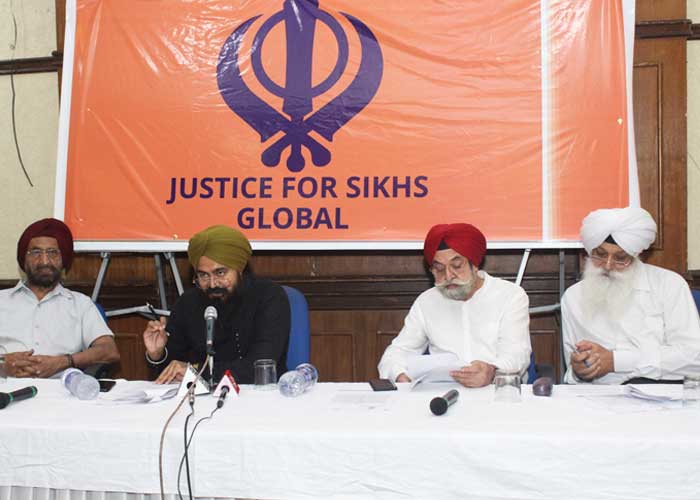 A Trust for the welfare of Sikhs Worldwide, namely Justice for Sikhs Global, was launched today here, as the Founders of the same made the official announcement.

The press conference was held this afternoon under the Presidentship of Manish Pal Singh and was also chaired by Co-Founders Jyotjeet Sabarwal, Ms. Manjeet Kaur, Ms. Diksha Bhasin and the Legal Heads of the Trust, S.Paramjeet Singh (Advocate) and S. Ranjit Singh Juneja (Advocate), who announced the launch of the platform to help the Sikhs globally under the following agenda.

a) Denunciation of Sikhs for Justice (SFJ) organization, which is misleading the Sikh Community Globally.
b) Promoting enhanced Participation of Sikhs in Indian Society by Highlighting the Contribution of Sikh Diaspora in the Government and our Armed Forces.
c) To inculcate the teachings of Guru Granth Sahib Ji Maharaj and Ten Holy Gurus among Sikh Youth.
d) To Educate Sikh Youth about Social vices like Drug menace etc.
e) To Keep alive Sikh History in the Sikh youth and importance of Sikhism in Indian Freedom.
f) To counter any Human Rights’ Violations against Sikhs, Worldwide, and help them in all possible ways.
g) To stop Brain-Washing that SFJ organization has been trying to do with the Indian Sikhs Globally.
h) To help Sikhs Globally in terms of any Genuine Visa/Passport/Authoritarian Problem.

The Founder of the Trust, Manish Pal Singh welcomed the Media and gave the Intro Speech, explained the purpose and agenda of the Trust, Justice for Sikhs Global, followed by a Question and Answer Session by the Media. “Considering today’s situations, it struck to our minds to collectively form a group in the name of Justice for Sikhs Global, with the tagline ‘A Justice League for Sikhs Worldwide’, which is an explainable enough tagline in itself.

Therefore, we formed this trust with the main objectives to stop the anti-national elements and forces from maligning the Image of Sikhs and stop them from their unholy efforts in breaking our Nation, Promoting participation of Sikhs by highlighting their contribution in Indian Freedom and Sikh Diaspora in Indian Government and important organizations.

To educate Sikh youth about the teachings of our Ten Gurus & Guru Granth Sahib Ji, To Promote Sikh Culture and Heritage and To stop Human Right Violation of Sikhs Globally and help the Sikh Community as much as possible.” Said Mr. Singh and Concluded the Press Conference.

With its Head office in Delhi, India, ‘Justice For Sikhs Global’ plans to extend Worldwide in a short span of time to make sure its presence in maximum countries and help the fellow Indian/NRI and Foreigner Sikhs.

Starting from its office in Delhi, the Trust plans to diversify to USA, Canada, United Kingdom, Middle East, Australia, New Zealand for now, with a simple motive of selfless service. The Membership drive of the Trust will start globally on the 550th Birth Anniversary of Sri Guru Nanak Dev Ji Maharaj, come November, 2019.