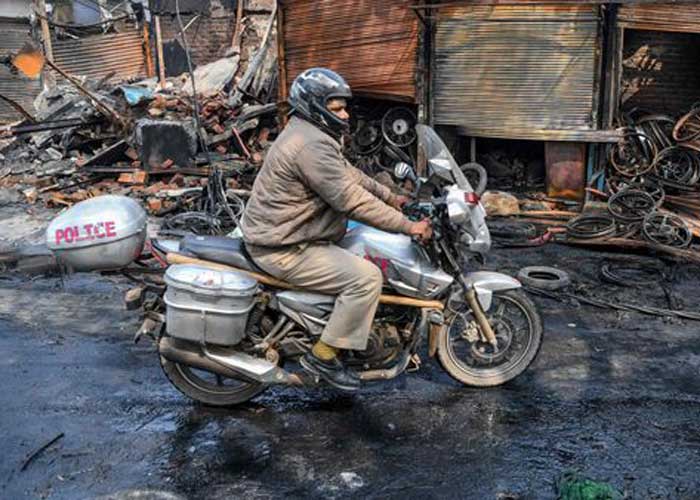 Joharpuri area in northeastern part of Delhi bordering Uttar Pradesh continues to burn. Even though the number of security forces deployed in the area has been doubled on Wednesday, there have been clashes between security forces and rioters.

The roads are filled with bricks and blood stains are visible in parts of congested lanes and by-lanes. Scores of houses and shops lie gutted and the people holed up inside lanes, many of which are “taken over” by rioters, are crying and yelling.

It is now clear that bricks have been stocked on the rooftops of buildings located across the road. And as soon as police personnel come in, armed men loitering around disappear inside the sub-lanes.

In tears, Yatendra Kumar Sharma says, “The rioters looted my house and burnt down my shop.” Sharma has been living in the locality for 30 years. He managed to send his family to his relative’s place as things turned bad, he says.

Like Sharma, many riot victims have started coming out of their houses, a sign of some confidence they seem to repose in senior police officers who are out on streets monitoring the area.

Most of Joharpuri area have houses which lie cheek by jowl and are constructed illegally. Some passages are very narrow, and one can only surmise what kind of profession the people living there could have, as burnt tyres, bikes, three-wheelers and wooden material are strewn all over. The area is so “insecure” that even fire brigade personnel could do their job in the presence of policemen.

Newly appointed Special Commissioner of Police S.N. Srivastava has doubled the deployment of his forces.

About 3 km from Karwal Nagar police station, the area has witnessed worse. “We made several emergency calls to the police, but no one responsed,” said a riot victim. “Had the police come in two days ago, the damage could have been contained,” he said.  (Agency)