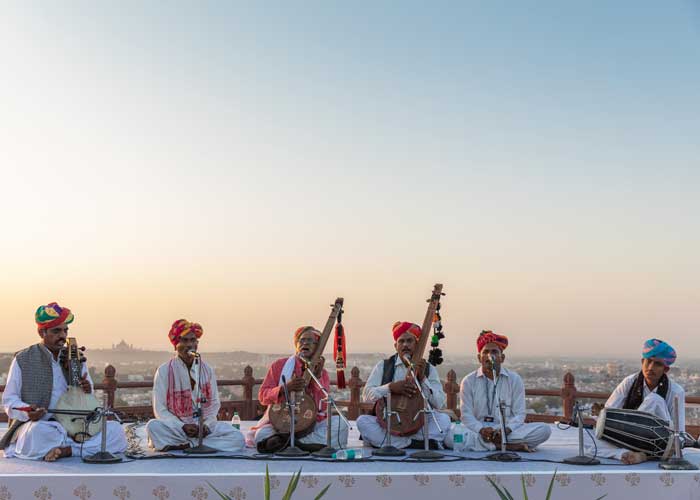 Mehrangarh, literally the ‘fort of the sun’, sits atop an uphill road far away from the bustling city of Rajasthan’s Jodhpur. The volcanic-rock fortress built by the Rajput royalty in 15th century, is home to a music festival that merges the state’s folk music tradition with a global sound idiom.

The Jodhpur RIFF (Rajasthan International Folk Festival), a five-day celebration of music going on at its various venues till October 14, brings alive the many moods of this seat of the Rathore clan, of which Maharaja Gaj Singh II is the current head. He is also the chief patron of the festival.

Every year during the festival, when the dawn breaks and the Fort walls are bathed in morning light, the fort is filled with the melodies of Rajasthani folk musicians, like the Meghwals of Marwar, who are weavers traditionally, but are also known for the rich folklore they nurture along with textile traditions.

In its 12th edition now, the festival also gives the stage to the soft, lilting vocals around India’s rich Bhakti poetry — the ‘Nirguni’ songs of Rajasthan. As the sun rises behind them in the historic city, visitors experience a slice of the desert soil’s voices.

Towards noon, the Fort witnesses diverse festivities, represented by the communities associated with the Jodhpur RIFF through workshops and patronage. “Chhang nritya”, “derun nritya” and “teraah-taali” form part of it, along with two traditional Bhil tribe performances Gavari (a musical street theatre) and Aangi-Baangi-Gair (a martial-looking, robust dance done with sticks).

The Festival hosts a sizable international audience, and there is no dearth of global music artistes on the schedule too. As the sun sets on the city, visitors flock to the evening sessions to close their days with the soulful tunes of Jodhpur RIFF.

Jodhpur RIFF 2019 is home to new collaborations with Rajasthani and Irish musicians, and also features Ballake Sissoko from Senegal, Authentic Light Orchestra from Switzerland and the master of the Armenian duduk, Emmanuel Hovhaurnnisyan, among others. It is also hosting its first woman RIFF Rustler, Yissy Garcia from Cuba. Afrobrat DJ Jose Marquez is also slated to perform.

Mehrangarh Fort, minutes away from the Umaid Bhawan Palace, where celebrities prefer to tie the knot, also sees midnight music sessions under the full moon.

“We couldn’t have asked for a better site. In fact, after people saw the impact of the festival, even more palaces and havelis have opened themselves up to international music festivals,” Festival Director Divya Bhatia told IANS.

Jodhpur RIFF is supported by the Mehrangarh Museum Trust, one of India’s leading supporters of Rajasthani tangible and intangible culture.

“The trustees saw Jodhpur RIFF’s potential as a significant contributor to the revitalisation of traditional Rajasthani performing arts, and so the site was offered to the festival by the chairman of the trust, His Highness Gaj Singh II of Marwar-Jodhpur,” said Divya Bhatia.

Set against the traditional backdrop of the Rajasthani stronghold, the Fort presents breathtaking architecture, and a beautiful melange of the global and local arts and culture that are an experience in itself.  (Agency)