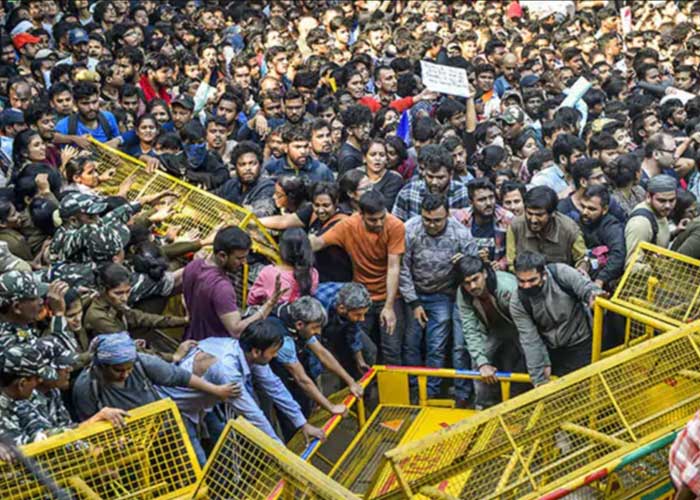 In the march to Parliament, called by the Jawaharlal Nehru University’s Students Union (JNUSU), thousands protested against the proposed hostel fee hike, on Saturday.

JNU students, teachers as well as others marched from Mandi House to the Parliament Street and demanded complete rollback of proposed hostel fee hike, on the 26th day of protests.

“People say it’s a matter of just Rs 300, that’s not a big deal. But the manner in which the government is trying to suppress students is not being spoken about,” Niyati, a Delhi University student, said.

Niyati along with others raised slogans for education to all, as they argued education couldn’t be seen as privilege but as a right, and the fee hike in JNU would make it difficult for many to get education there.

Alka Srivastava, Delhi Secretary of the National Federation for Indian Women’s, said, “We are supporting JNU students in their fight against privatisation. Education is not a privilege. It’s a right. The police’s behaviour towards students during the march (on Monday) was not appropriate.”

Noted JNU alumni Yogendra Yadav, Umar Khalid and Kanhaiya Kumar also attended the march. “The hiked fee would deprive about 80 per cent of students of quality education as most households in the country can’t afford such high fees,” Yadav told.

On the JNU administration’s allegation against students of vandalism and defacement, Yadav said, “You can’t be violent. You can’t indulge in vandalism. These are unjustified no matter who does it — students, lawyers or policemen.”

The move follows uproar in the Rajya Sabha on Friday over the police action against the students.

The JNU students are protesting against the varsity administration’s move to hike hostel, mess and security fee reportedly by 400 per cent. It has also limited the hostel timings.

While the JNU administration later announced 50 per cent concession for those belonging to the BPL (below poverty line) category, the students rejected that terming it as an eye wash, and demanded total rollback of the proposed hostel fee hike.  (Agency)