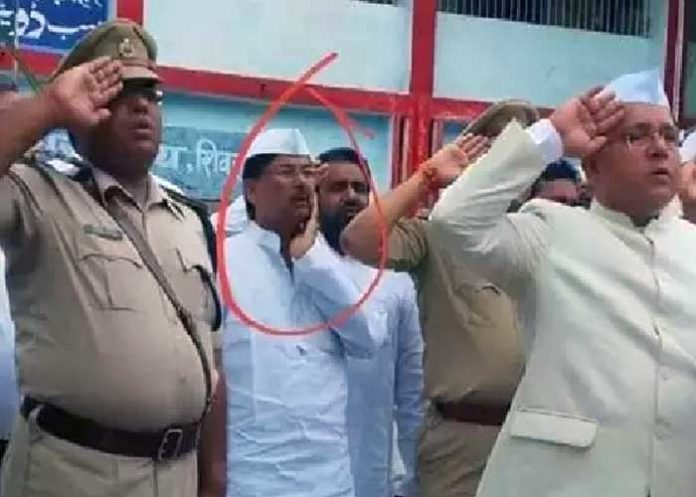 Janata Dal-United (JD-U) MLA from Bihar’s Sheohar, Sharfuddin, became the target of opposition leaders after his photo went viral showing the legislator not saluting the tricolour during an Independence Day flag hoisting ceremony.

The photo is from the Independence Day celebrations here, during which Sharfuddin is seen resting his hand on his left cheek and not saluting the national flag. All other dignitaries present there are seen in the picture saluting the tri-colour.

Demanding action against the MLA, Congress leader Premchand Mishra said: “He (Sharfuddin) is an MLA from a party which calls itself a patriot. If the MLA cannot give respect to the national flag, then what to expect from him.”

The opposition Rashtriya Janata Dal (RJD) has said that Sharfuddin should apologise to the people as he has insulted the national flag.

After the issue snowballed into a controversy, MLA Sharfuddin issued a clarification saying that he is a loyal soldier of Chief Minister Nitish Kumar. He clarified there was an insect on his cheek and he was trying to remove it. At that point of time, somebody clicked his picture and made it viral.   (Agency)