Home Punjab Jasmer Singh is dead. You don’t know who he was? He was... 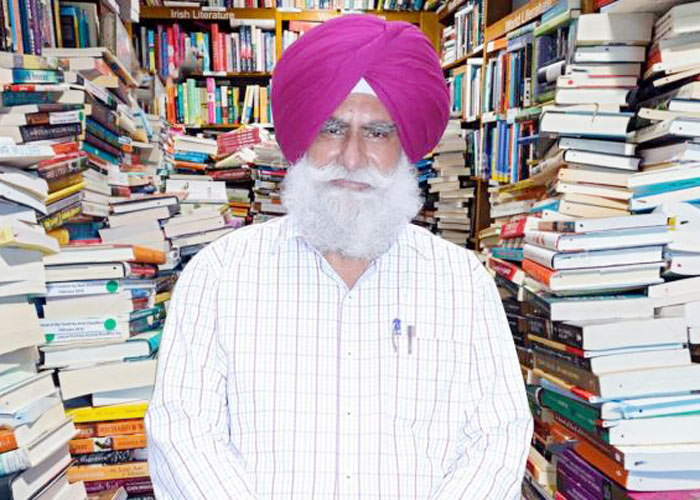 MOURN YE ALL! HE WAS A READER

In an epic fantasy written for today’s generation which is hard to wean off a screen and pulled into the world of books, a character, trying to understand the concept of horizon, asks, very straight-faced: “Is it like the end of an aisle of books?”

Jasmer Singh has left us, probably because he did not believe that horizon is anything like the end of an aisle of books. He must have thought there are more bookshelves to be explored in the yonder world. There’s no other reason he would have left behind his books in his two-room flat in Mohali as he passed away on January 15, 2020.

It sounds very pompous to say something like this, and he might have objected strongly, but since he isn’t around anymore, let us dare say it: in this one sense, he was a little like Socrates. Neither wrote during his lifetime, but they lived like rivers of knowledge that flowed through our lives and times.

Jasmer Singh would come into his own amidst a circle of close friends, whom he would enthral as he would effortlessly take them out for a swim in the oceans of poetry or references to the greatest minds across centuries whose names would stare down at you from the spines of books piled on his shelves.

A raconteur par excellence, his forte encompassed music, arts, literature, sports, cinema, and much else. He was a professor of English literature but also loved Punjabi literature dearly. He would talk about the greats of the Punjabi literary world, and you would be inspired to engage with Shakespeare, Milton, Eliot and Keats. He would set up a livewire connect between The Wasteland and our contemporary world.

Shiv Batalvi was a subject that was a tad too emotional for him, and he would often proclaim him as the greatest poet after Waris. He would accord due importance to Prof Puran Singh, Bhai Vir Singh, Bulhe Shah, Baba Farid, but would not be found amiss in stating that while all of them stood tall, it fell upon only the young Shiv to carry the burden of romance on his shoulders.

Of the two rooms of his flat in Mohali, one was stacked with books, spilling over the brim — by an estimate about 5,000 of them. People would often wonder how so many of these could fit in a space so tiny! And then there would be many more that would claim some real estate on his bed and besides it. Among his possessions were text books from his days in the school, and he could indulge in a long drawn harangue about why he has been holding on to these.

But pray, why the 200 odd dictionaries? Who needs so many dictionaries? But then you would only ask an inane question like that if you would have an inclination to listen to the significance of etymological roots of words. He could get you interested in a single word, peeling off the layers off a single word and unpacking the journey it has trudged through human history, and sometimes geography.

He would regale you with how the first dictionary came into being some 2300 years before Christ, but then it didn’t look anything like the lexicographic works of today. His collection included dictionaries from the past century, and from the one before that.

He would sing paeans to the writers of Encyclopaedia Britannica and then praise Bhai Kahan Singh Nabha and his Mahan Kosh no end, at times even crediting Bhai Sahib with being more meticulous than the folks at venerable Britannica.

Atlas was his shorter and concise version of limitless heaven. He would travel deserts and oceans, and trudge through countries and cities by just turning the pages of this cartographic wonder. A die hard admirer of Readers Digest and National Geographic, he would sometimes lament if there would ever be a time when journals and magazines like these would be published in Punjabi.

He would talk about politicians who used to be well read. His favourite examples to prove his point would often come from West Bengal, where, he would remind you, the Bengalis, when they were to christen the secretariat, opted to call it Writers’ Building.

Living a life intertwined with the world of books, Jasmer Singh would remind you about the upcoming World Book Fair. For him, the occasion used to be a sort of pilgrimage. He would save some money for it. Over the years, he had become a well-informed insider who knew the book stalls, the ones that offer genuine discounts and those that hoarded rare titles.

A phase came in his life when he immersed himself in Gurbani, and would recite some compositions for ‘n’ number of times, but he wouldn’t talk about it in vain. At one stage, he came close to giving up his job and his house, but his friends’ writ prevailed.

He could walk, and walk long distances. To walk besides him along the Sukhna’s boulevard in Chandigarh would forever be a cherished memory for many. At times, he would pause, but only to remind you of what walking is all about.

“You know that it was only during such walks that Sirdar Kapur Singh conceived the idea of ParasharPrashna?” It was during walks that great minds unravelled the mysteries of time, black hole, the world of atoms, quantum theory, death, reincarnation. He would talk about the big bang theory, and the sedate calm waters of Sukhna would stand witness to a reader talking.

People might now recall that his daughter Harkirat studied in that book-lined tiny flat to prepare for her PCS exams and is now a senior officer in the state health department, or that his son Tejwant is in Australia, doing well for himself, or that his wife Rajbir Kaur, a government employee, stood by his side and was the sheet anchor of his life, but that would be like telling you only half the story.

For a complete version, you would have to summon Marcel Proust to your aid, who would have struck an uninterrupted long conversation with Jasmer Singh in that book-lined room with its peculiar smell.

At times I think they were actually good friends — Proust and Jasmer Singh. “In reading, friendship is restored immediately to its original purity. With books there is no forced sociability.

If we pass the evening with those friends—books—it’s because we really want to. When we leave them, we do so with regret and, when we have left them, there are none of those thoughts that spoil friendship: “What did they think of us?”—“Did we make a mistake and say something tactless?”—“Did they like us?”—nor is there the anxiety of being forgotten because of displacement by someone else. All such agitating thoughts expire as we enter the pure and calm friendship of reading.”

That was Proust, or was it Jasmer Singh? You never know. They were people of the books who sometimes leave us because they just can’t overcome their curiosity of checking out the shelves beyond the horizon. In ‘Strange the Dreamer’, Lazlo asks, “Is it like the end of an aisle of books?” Jasmer Singh would know.

Or the friends he left behind. By friends, do I mean the thousands of books in that two-room flat, or ones like us who would remember him for a long, long time? Keep guessing, and walk by the Sukhna. Read Shiv or Prof Puran Singh, or Keats or Eliot. Someday, it’ll strike you, as Jasmer used to say. He didn’t write a book, but he did write a life. They call him a Reader.

(Adapted/translated by SP Singh from a memorial piece by Karamjit Singh, published in the Punjabi Tribune, on January 24, 2019. SP Singh is a senior journalist who is sometimes seen with that peculiar object called a book, the only social media he knows how to delve in.)