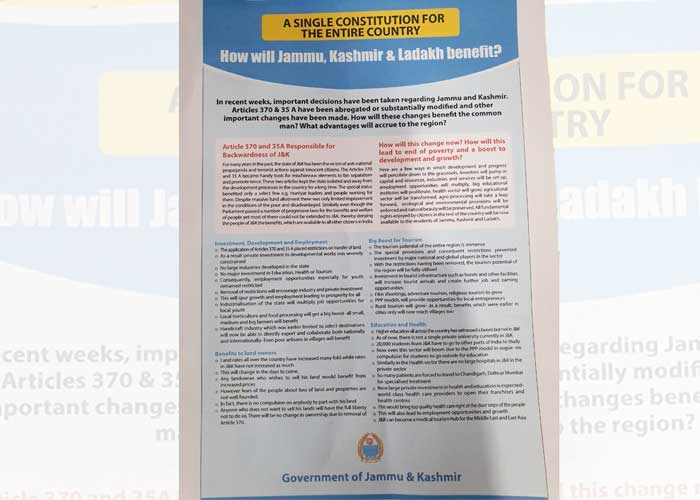 The Jammu and Kashmir government has come out with a public notice explaining the benefits and advantages of the abrogation of Article 370 which it said kept the state isolated for long and did not allow its development.

The government said that Article 370 and 35A were responsible for Jammu and Kashmir’s backwardness while only benefiting a select few like the separatists and their associates.

It said while earlier there were restrictions on transfer of land, it will now lead to growth and employment and private investments in education, health and tourism.

The government said land rates which had remained stagnant in the state will now increase like in other parts of the country, thus benefiting landowners.

But it said there would be no loss of land and no one would be forced to sell their land.

With the restrictions removed, the tourism potential of the state will be fully realised with investment in tourist infrastructure and hotels that will create more jobs.

It touted film shootings, adventure and religious tourism which will also benefit the rural economy.

The government said higher education has witnessed a boom across the country but not in J&K as the state does not have a single private university and students are forced to go to other parts of India.

With the PPP model in education, the students will not have to travel outside the state.

Similarly, it said, there are no large private hospitals in the state and patients have to travel to Delhi and Mumbai for treatment.

But now private investment would bring quality health care to the state that will create jobs and growth and make J&K a medical tourism hub.  (Agency)