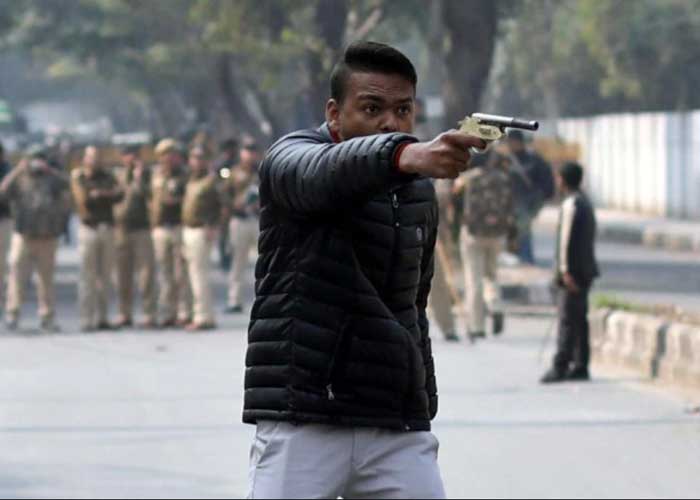 The man who opened fire on students protesting against the Citizenship Amendment Act (CAA) and the National Register of Citizens (NRC) in Jamia area here on Thursday, had put up several posts on Facebook making his intentions clear that he would indulge in violence to “end” the Shaheen Bagh protests.

The man, who goes by the name of Rambhakt Gopal on Facebook, has written several posts that he would “end the protest” at Shaheen Bagh by January 31. The women and residents of Shaheen Bagh are protesting against the controversial CAA and the NRC for the past one month.

As the students were set to start their march from Jamia Millia Islamia to Rajghat, he took out a country-made .315 bore pistol and opened fire a student sustained an injury in his hand. The police, which was watching the actions of the youth from the side, instantly took him into custody after he opened fire.

Before opening fire, the youth had shouted, “If you people have to stay in India then you will have to say Vande Mataram, and now I am going to give you your freedom.”

Even before firing the pistol, the youth was heard raising slogans of “Jai Shri Ram”. While scrolling through his Facebook posts, it was found that Gopal went live a number of times from outside the campus of Jamia and made a numbers of posts in which he mentioned that he was a lone Hindu in the area and none of the mediapersons covering the protest were Hindus.

In one of his posts, he also asked the people to help his family in his absence and as a last wish he wrote that his body should be wrapped in the saffron cloth and people should raise the slogan of “Jai Shri Ram” on his last journey.

In one post he also mentioned that he will avenge the death of Chandan Gupta, who died in firing while taking out a bike rally in Uttar Pradesh’s Kasganj two years ago.

Meanwhile, the student who received a bullet injury has been identified as Shadab Farooq, a student of MA Mass Communication. He was shifted to Holy Family Hospital for treatment.

The police is interrogating Gopal.  (Agency)