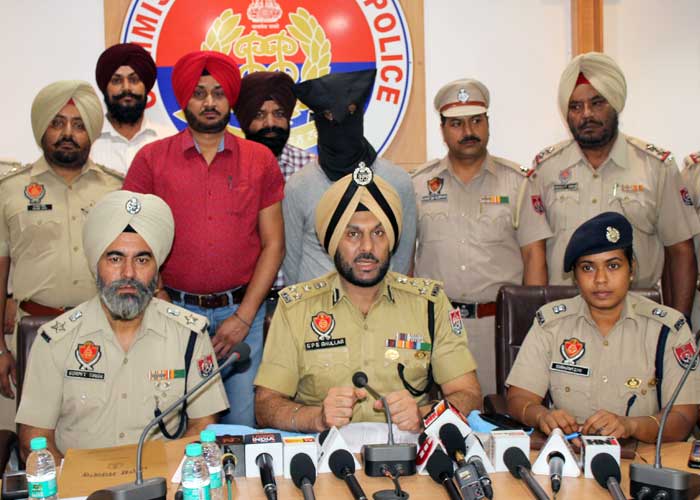 Tracing the case of high decibel blast that took place in Baba Mohan Dass Nagar within less than 24 hours, the Jalandhar Commissionerate Police today nabbed the main accused in the case who had illegally stored the crackers illegally in the plot.

Divulging the details, the Commissioner of Police Mr Gurpreet Singh Bhullar said that the blast had took place on Diwali night due to which a substantial damage had took place in the houses in the locality.

He said that as soon as the blast took place teams of bomb disposal, dog squad, Forensic Science and others has reached the spot.

Mr Bhullar said that a case under section 3/4/5 of the Indian Explosive Substance and 286, 188 and 427 of IPC was registered against the owner/ care taker of plot viz Harjinder Singh alias Jindi S/o Tez Singh and Gurdeep Singh alias Gora S/o Khazaan Singh.

The Commissioner of Police said that acting swiftly the Police has arrested Gurdeep Singh Gora from his house in Riazpura locality.

He said that during investigation Gora has revealed that he had doing the Bussiness of crackers and Chinese strings from last 15 years at Partap Bagh locality. Mr Bhullar said that last year Police had registered a case against Gora for illegally stocking crackers at a Godown in Waryana.

The commissioner of Police said that now Gora had taken a Godown on rent at Ghah Mandi where these crackers were stored.

However, he said that after Police intensified its campaign against illegal crackers Gora along with his friend Vikrant and Jindi stocked it in a vacant plot of Jindi’s relatives where the blast took place. Mr Bhullar said that efforts were afoot to arrest the care taker Jindi who is a small time transporter.