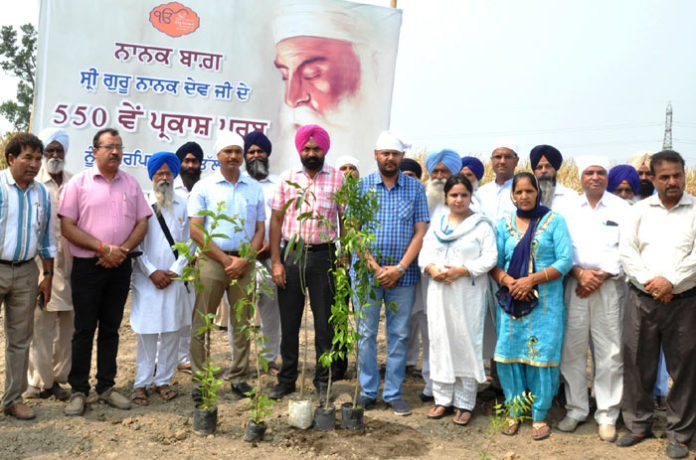 Mr. Sharma along with Additional Deputy Commissioner (Development) Mr. Kulwant Singh and others planted saplings on 2-acre land near Gurdwara Shaheed Baba Nihal Singh Ji (Talhan Sahib). A total of 550 saplings will be planted in ‘Nanak Bagh’ which is being set up to commemorate the 550th Parkash Purab of Sri Guru Nanak Dev Ji.

Addressing the gathering, Deputy Commissioner Mr. Varinder Kumar Sharma said that this state of art Bagh would enhance the green cover in the district besides checking the environmental pollution in it.

He disclosed that the Japanese technique is being adopted for the plantation which ensures 30 times denser growth of plants and hence better carbon-dioxide absorption.

He told Nanak Bagh spreads 2-acre land which would be in fact a milestone in reducing greenhouse gases and making the environment healthy.

He envisioned that besides checking environmental pollution, this Bagh would also help in improving groundwater recharge.

He said that Nanak Bagh would be a real tribute to Sri Guru Nanak Dev Ji who was a nature lover and laid the foundation of protecting air, water, biodiversity and forests through his teachings.

He exhorted the people to plant saplings and called that it is the bounden duty of everybody to make stupendous efforts for protecting the environment and giving a better future to the next generations by planting saplings.

Meanwhile, the Additional Deputy Commissioner Mr. Kulwant Singh said that ‘Nanak Bagh’ would be pivotal in enhancing the shrinking green cover in the district. He added that trees play a crucial role by conserving natural resources and improving the environment.