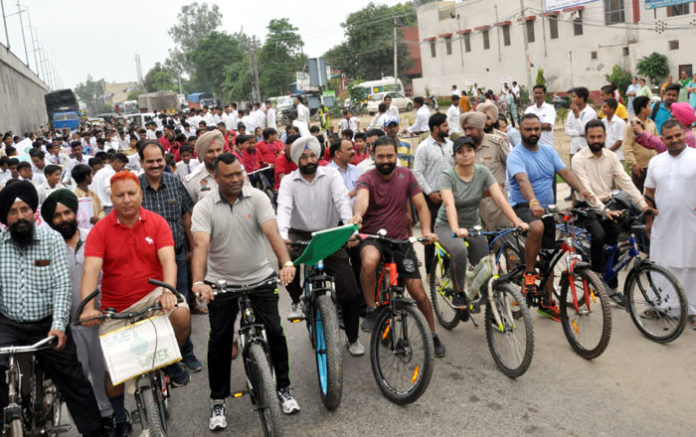 The cycle rally organized under the aegis of Drug Abuse Prevention Officer (DAPO) campaign and Jal Shakti Abhiyaan was flagged off from Swami Virjanand Samarak at Kartarpur. The rally culminated back at the same venue after passing through Kishangarh Road, Sri Guru Arjun Dev Public School, AAPI Charitable Hospital, Naseebu Chowk, Attru Chowk and Furniture market. Hundreds of school students from various schools of the city participated in the mega event to spread awareness on these vital issues.

In their address, the Deputy Commissioner, Superintendent of Police and Deputy Superintendent of Police called upon the students for playing a proactive role in tackling these menaces. They cautioned the students that state could transform into desert if necessary action to check the wastage of water was not taken by them. They said that the excessive exploitation of water needs to be checked at every cost for which every individual should play their own role.

The Officers asked the students to disseminate the message of saving water in every household of the district. Likewise, they said that strenuous efforts also needs to be made for generating maximum awareness against the curse of drugs. They said that Punjab government was already making serious efforts to wipe out the drug menace from Jalandhar. But they said that it would not fructify unless all of us especially the youngsters come forward for generating awareness regarding it.

The officers said that this would help in sensitizing the people about this grave issue of immense public importance. Mr. Kulwant Singh also asked the students to give full support for making ‘Jal Shakti Abhiyan’ a mass campaign to save the depleting ground water level in the district.