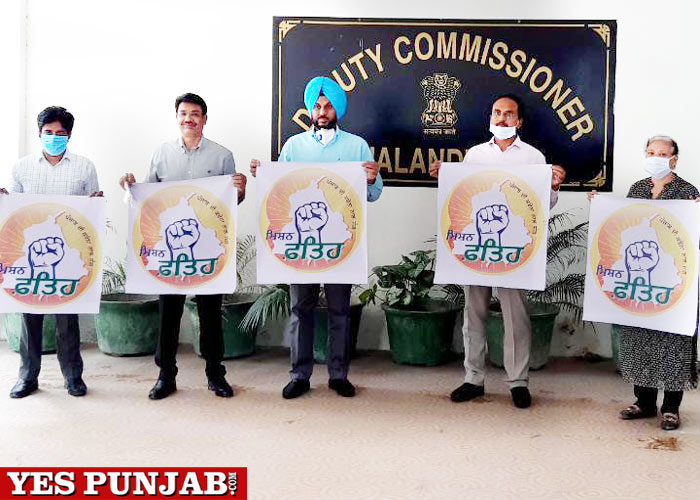 The Deputy Commissioner, Commissioner of Police and Senior Superintendent of Police, who reviewed the flagship drive launched by Punjab Chief Minister Captain Amarinder Singh on Monday, said that it was primarily aimed at spreading mass awareness about the pandemic.

They said that the District Administration would play a key role in this exercise by serving as the link between the government and the people adding that it would motivate the people to remain vigilant and safe. The officers said that the campaign would broaden the ambit of Mission Fateh beyond the frontline workers thereby transforming fight against Covid 19 into a mass movement.

The Deputy Commissioner, Commissioner of Police and Senior Superintendent of Police said that during the drive emphasis would be laid on recognizing the threat of the virus, which continues to pose serious dangers to the people.

They said that people would be encouraged to lead by example, advise others about the precautions to be taken and report violations that come to their notices. The officers said that ‘Mission Fateh’ was a true reflection of the Punjabi spirit that could overcome all odds to emerge victorious.

The Deputy Commissioner, Commissioner of Police and Senior Superintendent of Police said that to implement the campaign in an effective and result oriented manner, the Department of Information and Public Relations has prepared a comprehensive roadmap of activities aimed at spreading awareness on wearing masks, washing hands, maintaining social distance, taking care of the elderly, remaining vigilant about the entry of outsiders in the locality, use of COVA App to track patients of the virus and maintaining safe distance from them.

They said that other focus areas include creating awareness on the importance of home quarantine, symptoms of flu and actions thereafter, restrictions during lockdown 5.0 and penalties/fines in case of violations, community mobilisation to jointly fight against the pandemic.

They said that all the state government departments would come together and work in unison to create a positive atmosphere in the state, enabling the people to push forward and make Mission Fateh successful.