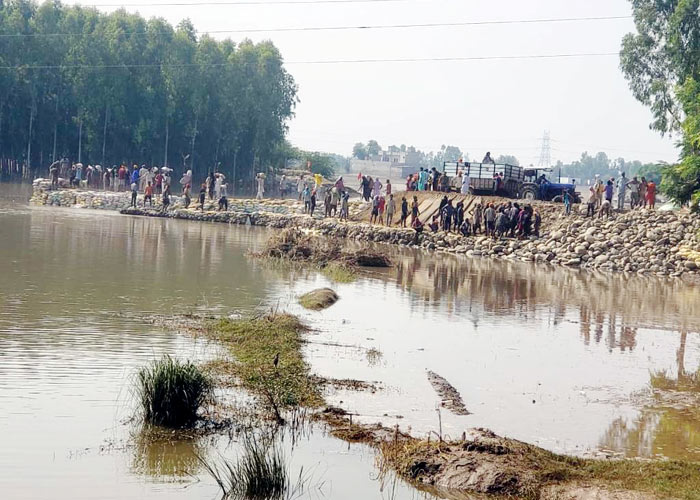 After plugging almost all the breaches on Sutlej in Phillaur sub-division, the district administration has now laid focus on plugging breaches in Shahkot sub-division and expedited the operation to plug the breaches.

The administration started the plugging work in village Mandala on Wednesday in where the Dhussi bandh on Sutlej has a breach of 250-ft. The volunteers of various organizations along with hundreds of MGNREGA workers are on task to plug the breach with the sand bags.

Divulging the details, Deputy Commissioner Mr Varinder Kumar Sharma said that in Phillaur, almost all the breaches have been plugged and breaches in Shahkot will be plugged soon with more work force and focus. He said that in Shahkot, the work was already on going on swift pace.

He said that in Jania Chahal village, the Indian Army and MGNREGA workers have been working round the clock to plug the biggest breach on Sutlej which was around 500 ft wide.

He said that till today, 145-ft sand bag embankment and 135-ft stone embankment has been built to plug Jania Chahal breach and would be completed soon.

Deputy Commissioner said that in consonance with the firm commitment of the state government led by Chief Minister Punjab Chief Minister Captain Amarinder Singh to bail out the residents of marooned villages the district administration had called in the Army to plug in this breach.

He said that required logistics for plugging in the breach like sand bags, boulders and others were being pumped to ensure that the work was completed without any delay.