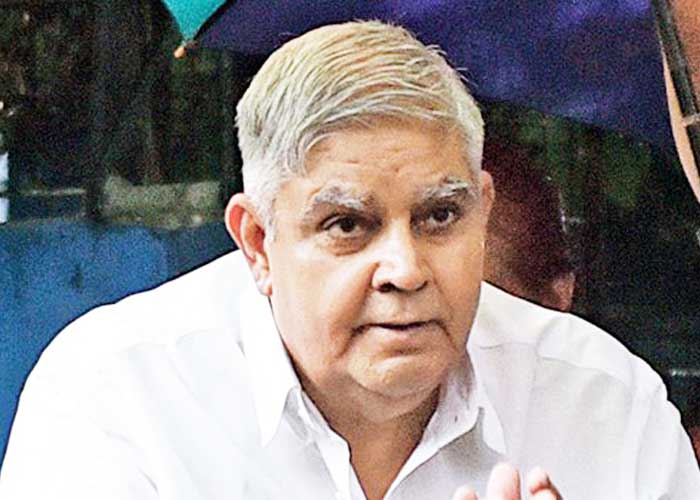 A section of Jadavpur University students in an open letter to West Bengal Governor Jagdeep Dhankhar, have informed him of his ‘rustication’ as the Chancellor for ‘wasting’ their valuable time and giving ‘unsatisfactory’ responses to their questions, including on the new citizenship law (CAA).

The “letter of rustication” from the Arts Faculty Students Union was addressed to the ‘honourable ex-chancellor’ with the subject line saying it would be ‘effective immediately’.

To the letter was attached a report card that called the Governor’s overall character ‘spineless’, his general knowledge ‘less than satisfactory'”, augmentative capability ‘poor’ and sense of history ‘nil’.

It listed Dhankhar’s strength as “unwavering dedication to ignoring violence against students, activists and Muslms”.

The missive has come amidst Dhankhar facing fierce protests from students and pro-TMC (Trinamool Congress) staff union — Sara Bangla Sikshabandhu Samiti — which prevented him from attending the university court meeting as also the convocation on Monday and Tuesday, respectively, calling him an “agent of the BJP” and railing against him for supporting the CAA.

The letter accused Dhankhar of being present on the campus on September 19 “along with miscreants who hurled bombs, sexually assaulted women and vandalised sections of the university.”

One of the initial standoffs between the Raj Bhavan and Nabanna (state secretariat) happened over the Governor’s visit to the university on September 19 to ‘rescue’ Union Minister Babul Supriyo, who was heckled by a section of students.

The letter also alleged that the governor-chancellor arrived in the university ‘uninvited’ on December 22. “We have investigated your behaviour and motives and come to the conclusion that they are shameless attempts to seek attention from students, thereby wasting our valuable time,” said the letter.

Referring to Dhankhar’s December 23 visit to the campus to attend the university court meeting when he responded to posers from the students, the letter said, “As part of the ongoing evaluation of university officials by students, you were asked a number of questions about the NRC, the CAA, the SC/ST Commission, violence unleashed on Muslim and other students. We have found your responses to these questions unsatisfactory.”

“Academically speaking, your thesis holds no water and your defence is weak,” the letter said, alleging Dhankhar was following the BJP ‘party line’.

Leading academics of West Bengal have already expressed anguish over the volatile happenings in the varsity and the treatment meted out to the Governor.

“I strongly condemn what happened at the varsity convocation. The Governor as the Chancellor went to attend the ceremony. The standard convention is that all diplomas, medals and other things are presented by the Governor in his capacity as the Chancellor to the students.

“Here the Governor was not allowed to enter the campus. He waited there for long and only heard the ant-Governor slogans,” said former Presidency College principal Amol Mukhopadhyay.  (Agency)